CEO, CodeSee - A tool for developers to visually map their codebase. 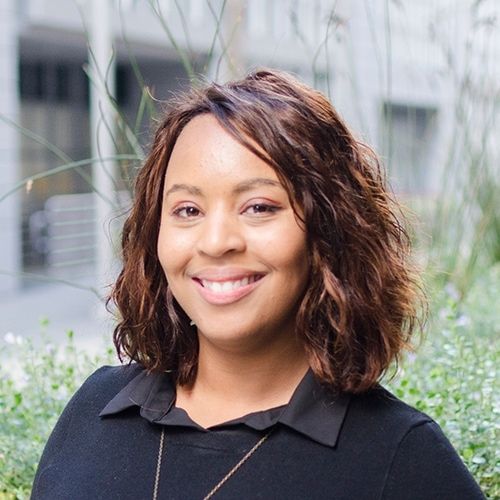 What is CodeSee and why did you build it?

CodeSee is a developer tool. We help developers to visually understand how their code works, and continuously document and share their large-scale codebases.

I had the idea a couple of years ago when I was working at Docker. We were building this new feature that we were really excited about. It was really helpful for the company to show security vulnerabilities in Docker images.

When you download a Docker image, you want to know how many potential vulnerabilities you have. Two days before we were set to launch the feature, we discovered a bug, and we had no idea how to fix it!

As we dug into it, we found the bug touched a part of the codebase that an engineer who had left the company had been working on. It would take a month to really understand this part of the system before we could change it, so we didn’t launch the feature. No one knew how it worked. We didn’t want it to cause catastrophic downstream effects to other parts of the Docker system. We were too terrified to touch it. I started asking myself, “Why do we not know how our systems work? Why do we not understand all of the complexities of our system?”

CodeSee solves that. At any point in the codebase, it allows a developer to understand the code, see how it works, and build a full understanding of what’s going on. CodeSee allows you to visually see how your code works. The use cases include onboarding new team members, or debugging new parts of the codebase, or even just coming back to a component you’ve not touched for a while. Whether that’s whilst debugging or during code review, building a new feature, or any time you need to understand how the code works, we can help you.

How does it work?

Using a plugin, in just two easy steps a developer can integrate with their development process. Download our NPM package, and change a couple of lines. It typically takes just a few minutes. You’ll then get a really cool floating action button - we call it the CodeSee Eyeball - that allows you to create recordings of your code and travel around your codebase.

Once you’ve “recorded” the action you want to inspect, we create a Code Execution Map which we call a Data Flow. This is every single line of code that ran between when you hit start and stop, in code execution order. We can make a visual map of how the computer sees your code - frontend, backend and network requests - all of the things that would be of interest to a developer.

This helps you deeply understand how the code works, what it’s doing, and what the runtime data state is as well. Everything you might be maintaining in your head as if you were stepping through the execution is visualised by CodeSee. It’s basically like if you were to put a print statement everywhere. 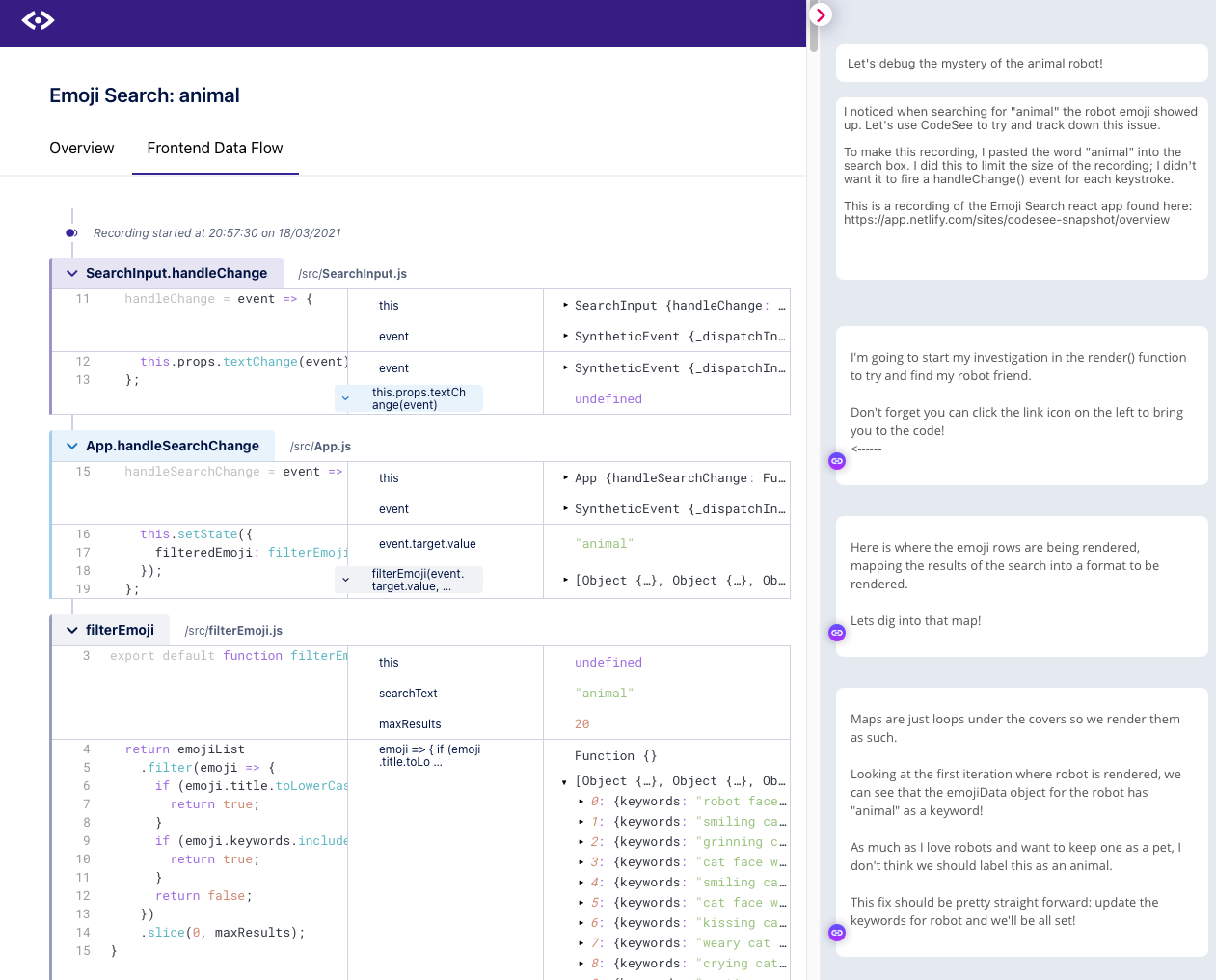 How have you found people solve this problem before they come to CodeSee?

The problem is they are not solving it. Typically when I talk to developers there are only two ways to solve this problem today. You need to read the code line by line and build a mental model of how the code works in your head, or you ask someone “How does this thing work?”

You can write a failing test and try to make the test pass, but that doesn’t necessarily say that you have a good test. If you’re trying to understand what you did, or what someone else did, and why someone else did it - the only way is really to read the code. There’s also documentation, but no one really trusts documentation. That’s why we leave it out, because if you do use it, it could be totally out of date or wrong.

Code is changing so quickly that the old methods just don’t work. We end up missing something. We think we understand, but in actuality, it doesn’t work the way that we think, or there was something else that we didn’t initially see because it’s out of the scope of the task.

That’s where CodeSee really shines. Critical errors occur when people think it will work one way, but then there’s some other thing that was built three years ago that’s not been documented or commented, and the original coder has left. That’s when critical errors happen.

I get to do a lot of things where I’m talking about this problem of continuous understanding, which is really fun for me.

Our team is really fantastic! Beyond my co-founder, Josh Leven and myself, we have an engineering team of three people, one person in devops, and a designer. Every one of our developers have over 15 years of engineering experience. They are really a dream team.

Cubes Silverstein was an early engineer at Eventbrite, Grayson Hay and Liz Erickson previously worked together at Tableau. Peter Cho, who’s our head of design, used to lead design at Medium and Pocket.

Julia Gilinets is our head of strategic accounts. Jess Rose and Ramón Huidobro are our two developer advocates. Jess led developer programs at Mozilla and Ramón used to be a part of the TechSpeakers at Mozilla. We also have a couple of part-time folks that help out as designers, and a CFO to help me with finance things. We also have Tommy (our dog) who is on his walk right now.

I used to be an analyst where I had to write a lot of macros for Excel. I worked at an outreach company that helped to manage Obamacare. My job was to combine lots of data, back when Tableau was the new hotness. I started trying to analyze all of this data writing macros, and started to think: “Oh. How do I make programs do what I want them to do?”

Randomly, I then met someone at a party who asked me if I know how to ‘do Facebook?’. At the time I was about 19yrs old. I started to help her and that blossomed into a web development and social media agency that I started. I was building websites for other people, which became somewhat successful. I kind of self-taught myself, but realised that I had a lot of gaps in my knowledge, so I went back to get a Computer Science degree to deepen my abilities and really understand how to be a better developer.

What has been the most interesting development challenge building CodeSee?

We also show deep runtime data. That depth comes with its own technological challenges e.g. how do you send a 300MB recording over the wire? How do you deal with this huge JSON blob with all of these events? It’s really a challenging problem to be able to manage all of this data.

There’s a balance of making sure that, if a developer did want all the data, e.g. five levels of data deep, that it’s available to them. It’s a unique thing that only we’ve done so far. Thanks to the depth of the data that we have, it enables things that have never really been possible before, like full search of the runtime state.

I have a 16” MacBook Pro for now - we’re building a developer tool so I didn’t want to take the risk on an M1 just yet!

I have a vertical mouse for ergonomics but just a regular Apple keyboard, and a 32” curved Phillips monitor. I have my laptop on an arm swing next to the curve monitor. I’ve always liked having one big screen that curves.

My headphones are the Sony MX4 - I really love Sony with the double tap buttons! 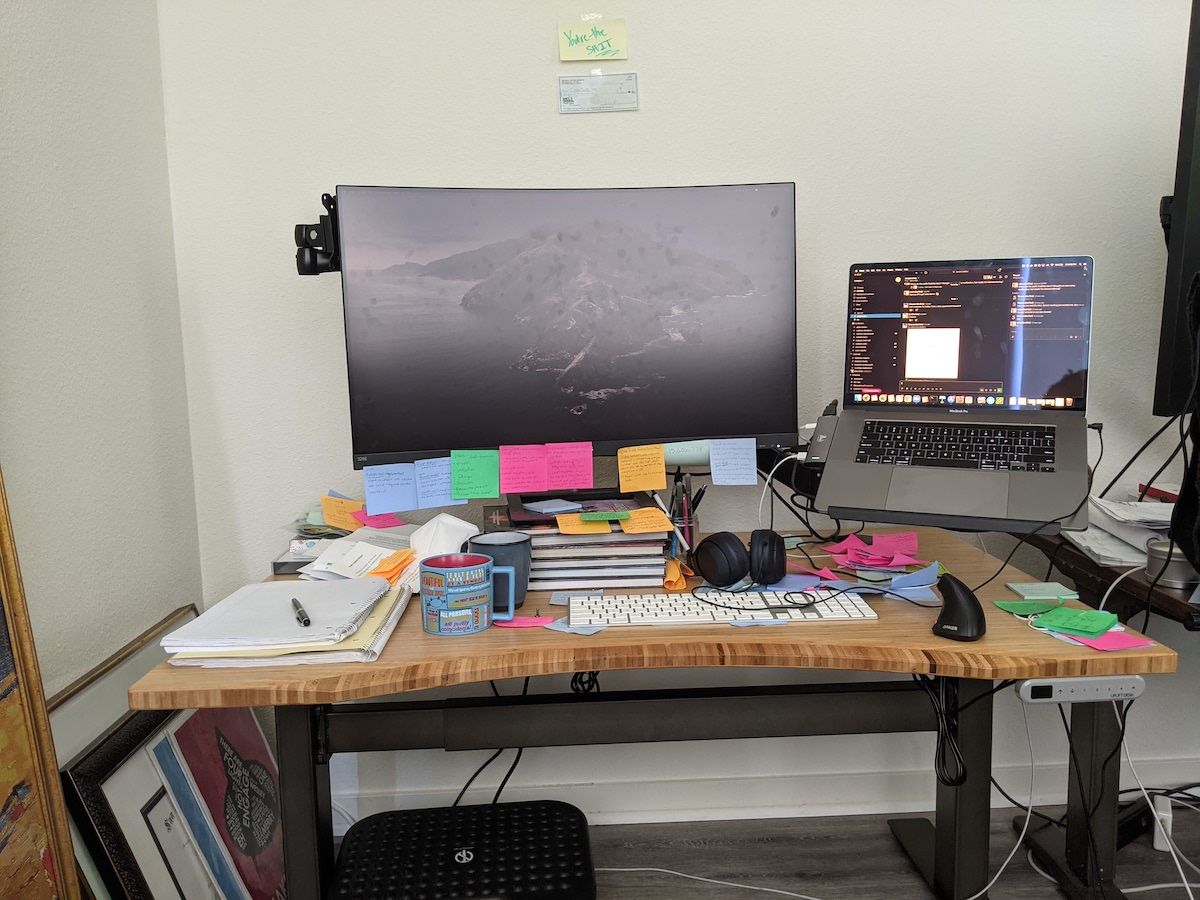 I have an Uplift standing desk. It has a bamboo top with a curved middle, so I can actually scoot all the way up to it, instead of having this flat desk poking me in the stomach.

My chair isn’t fancy - my co-founder uses our fancy chair, which is a Herman Miller. I got my chair from a girl in my apartment building who was giving it away.

Silence or music? Ocean white noise. It’s called Pure Focus by Kelly Howell. I’ve been using that same track for a decade. It’s an hour line and I just cycle it. I’ve been doing the Pomodoro technique lately. I play it one time, get focused and then take a break and do other non-technical things like emails. Then, I do another hour.

I love eating … I’m definitely a foodie. I love walking the dog, just going outside. I like sitting on beaches. That’s an activity, right? The beach sounds really calm to me, which is where the white noise comes from, I guess.

CodeSee is a tool for developers to visualize their codebase. The beta release was featured in the Console newsletter on 22 Apr 2021. It was also featured as an “Interesting Tool” on 30 Sep 2021 and 25 Aug 2022. This interview was conducted on 16 Apr 2021.