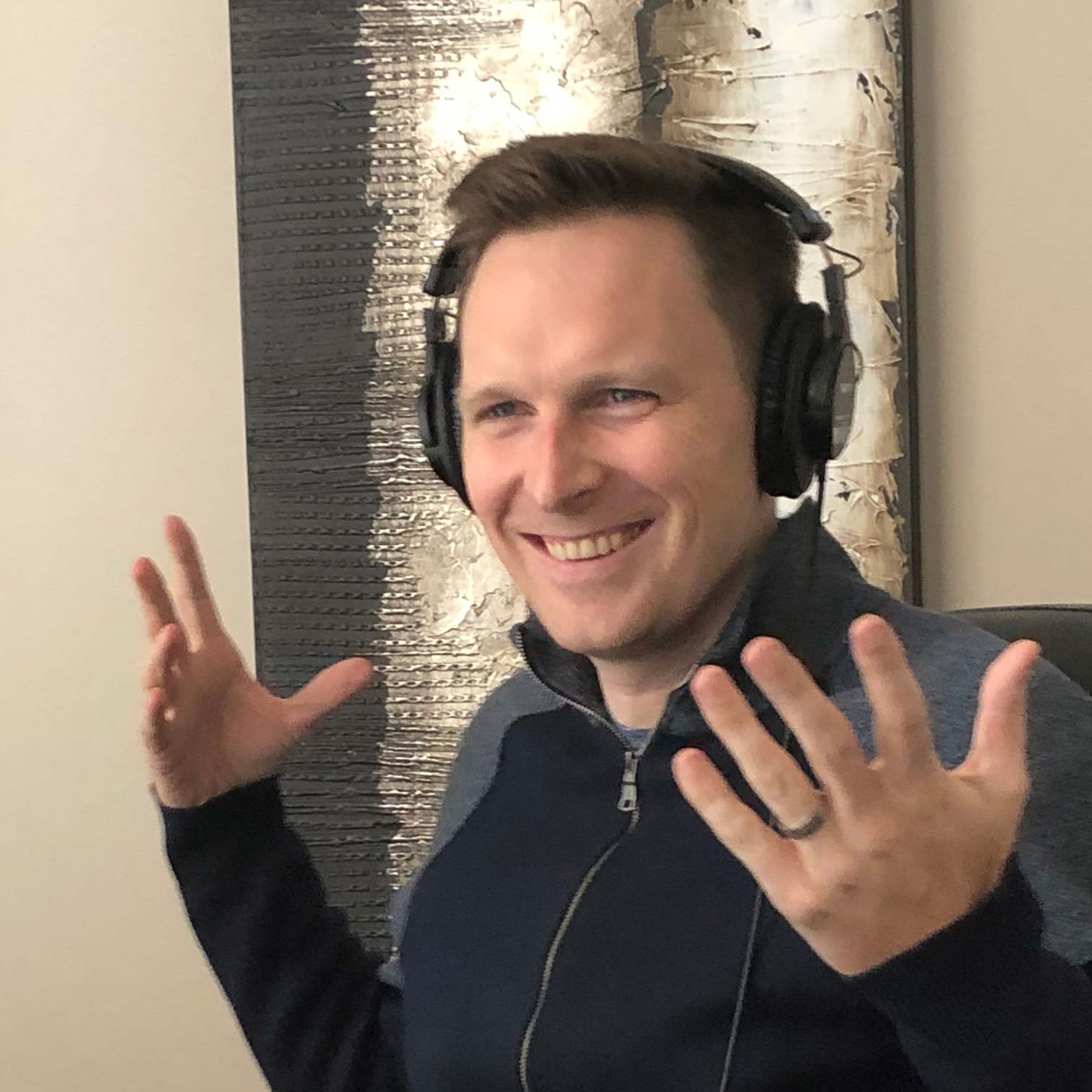 What is Earthly? Why did you build it?

If you have a build process that is complicated and want to simplify it then Earthly can help.

Building software is hard, particularly developing a quick build pipeline. It is really important to have a good development workflow with fast feedback cycles. This is more complex than simply turning some source code into an output. There will be dependencies to download, unit tests and integration tests to run. These could also involve a database with some sample data to run tests against, an external service or third party dependency. Ideally, it is possible to do all of this very quickly and in a repeatable fashion.

With so many different build tools, it’s important not to be tied to a specific vendor. This is the messy problem that we’re trying to solve. Earthly is a syntax for defining how you build your software, with an open source tool for executing it. We’re trying to make it easier to build a continuous integration pipeline.

I like to think of our solution as a modern version of a makefile. Lots of people are familiar with makefiles, but it’s old technology. What does modernizing it look like?

First, it involves making sure each step is containerized so that each build step runs in an isolated environment. Second, there must be no dependencies that haven’t been explicitly listed.

Third, makefiles don’t run well in parallel unless you do specific things. If we are able to isolate each step, then we can separate what depends on what, and run those in parallel.

Earthly is also cache aware. We can tell if nothing’s changed, or even if an input has changed but that doesn’t mean the cache needs to be invalidated. This can speed things up dramatically because we can use a cached result from a previous step.

Working with multiple repos is another interesting case. Oftentimes people might have a dependency that lives somewhere else. Can we pull that in? How do we make that easier?

Our big idea is having an easy to understand syntax so that the build doesn’t become a magic combination of various technologies. In my experience, a lot of builds are a mix of things: Bash scripts, docker files, Gradle. A whole grab bag of technologies. We’re trying to come up with methodology that can be used by everybody.

Where Earthly fits into the stack.

Is the fact that Docker is well known why you use a similar syntax?

Exactly, we are using a Docker-like syntax so that people who’ve written Docker files before will understand it. We would prefer that the way we specify things be easy to understand versus absolutely perfect, so that you don’t work in the builds every day you can still see what’s going on. There may be a very concise way to specify a concept, but if it means it is hard for you to remember when you go back to it, then I don’t think we’d want to make that trade off. We want it to be understandable.

I work from my home office, and have been working remotely for nine years now. I usually start the day by working out what I want to accomplish, creating a small list, and blocking off some items in my calendar. For example, I might block out two hours to work on a blog post, then we have our standup where I meet with the rest of the team to discuss what everybody’s working on.

Part of my job is to be the public face of the product, so I spend time answering people’s questions, putting together sample code for the product, talking to people about the problems they’re having and communicating that to the rest of the team. It’s my first time in a role like this and I’m enjoying it quite a bit. I have some very minor code contributions to the core product too, but it’s not my core job. I am more often talking with somebody in Slack, responding to issues and writing up things we’re working on.

What is the team structure around Earthly?

We’re a remote team of four. Our founder Vlad A. Ionescu is based in the Bay area, I’m in Peterborough, Ontario, Canada, Alex is in Victoria, British Columbia and Corey is based in Utah. It’s nice to be able to have a full company meeting every day.

When I was in high school, I took a class on computer programming. It was in Turbo Pascal, which probably doesn’t see much use nowadays, but the class was super fun. We were split up into teams of two and had to build a Yahtzee game. After an initial half of the semester spent explaining things to us, we had the remaining time to build the game in DOS. If you’re not familiar with Yahtzee, you roll a number of dice and it’s scored like poker hands, so part of the challenge was writing simple rules around calculating the score based upon what you rolled in the dice.

I loved it so much. It was hard at times, but I really liked the quick feedback loop of making a change, running it and then seeing what happens. Maybe this is why I’m interested in continuous integration now. From here, I went on to university to study computer science, then got a job as a developer and I’ve been doing it ever since.

At university, I explored a lot of languages with a heavy focus on Java and some C. My first job was with C#, then I was a Scala developer for quite some time. Now I work primarily in Go.

What is the most interesting challenge you’ve faced working on Earthly?

The hardest thing that we’ve had to deal with is the fact that the world of building software is very diverse. There’s lots of different tools, languages and combinations of these things.

A specific challenge we’re currently debating is caching. We have caching support that works well in most cases. We’re able to say, if your files didn’t change then we don’t need to rerun that step, and it works great, but our customers often request more advanced caching.

There’s a tradeoff we’re trying to work through. It is important that these builds are repeatable, always getting the same result, but caching has the potential to invalidate it. We’re trying to find a way to specify these more advanced rules where a particular step doesn’t need to be rerun, without endangering the process. We want our customers to be able to override cache invalidation, such as when something looks like it’s changed but actually the developer knows it hasn’t really, so we can still use the cache.

With a Java VM, for example, we might have an old build in Earthly where there are lots of dependencies that get pulled down which we can cache. If the dependencies haven’t changed, then we won’t have to re-download all these JAR files. The challenge is when a new dependency is added, we’re invalidating the steps by re-downloading JAR files.

I would like to keep everything that’s there and rerun it with the new files on top. We’re trying to solve this problem but there is a danger that we are accumulating dependencies over time and that’s not something that we want to happen. Ultimately, we want to have a way to make sure that people can get these fast build times. Once we have an approach that we think will work, we plan to release it as an experimental feature.

How have you found interacting with the Open Source community on experimental features?

This is my first time where the business I work for is an open source product. People have been great at reaching out, providing feedback, testing scenarios, contributing code. It’s really been terrific.

For example, I spent some time working with the Elixir Phoenix Framework project. Phoenix is a web framework that has had problems running integration tests. I spent a couple of weeks putting together a build for them and working with some contributors on their team, showing them how the tool works. They were so excited for my help and I was getting feedback on our product. It’s a virtuous circle.

I’m enjoying using Roam Research, a note taking tool. It’s a very simple concept, just like listed bullets of notes in a Wiki format, but very intuitive to use and has been great for keeping track of things.

Thinking about software, there’s a project called BuildKit that came out of the team behind Docker. It’s open source and allows you to turn a Docker file into an image, so it’s sort of a compiler, but a compiler that is compiling software artifacts. We are using it to power some of the reproducibility steps that we use. It’s a cool piece of tech. It’s not bound to anything specific to Docker, and was built to be generic to take instructions and bring things together to figure out how to execute things.

I have a 16-inch MacBook Pro plugged into a CalDigit docking station. My laptop is closed, with everything I use docked into it. The docking station has my headphones, a LogiTech C920 camera and two external monitors and my mic plugged into it. I use an Apple Magic Mouse with a bluetooth wireless Apple keyboard, nothing too fancy.

My two monitors are pretty big. One is in landscape and one’s in portrait. The nice long sideways view is good when you have to have a big page full of code.

I have a podcast that I do on software development, so my audio setup is a bit fancy. I use a MixPre 6, which is like an audio interface that can also record and take in various outputs. The microphone I use is a RE20 Electro-Voice. It avoids picking up sounds outside of a couple of feet from it, which is very handy for home work. I also have sound panels on the wall, which are handy for reducing external noise.

IDE: VS Code with vim keybindings. 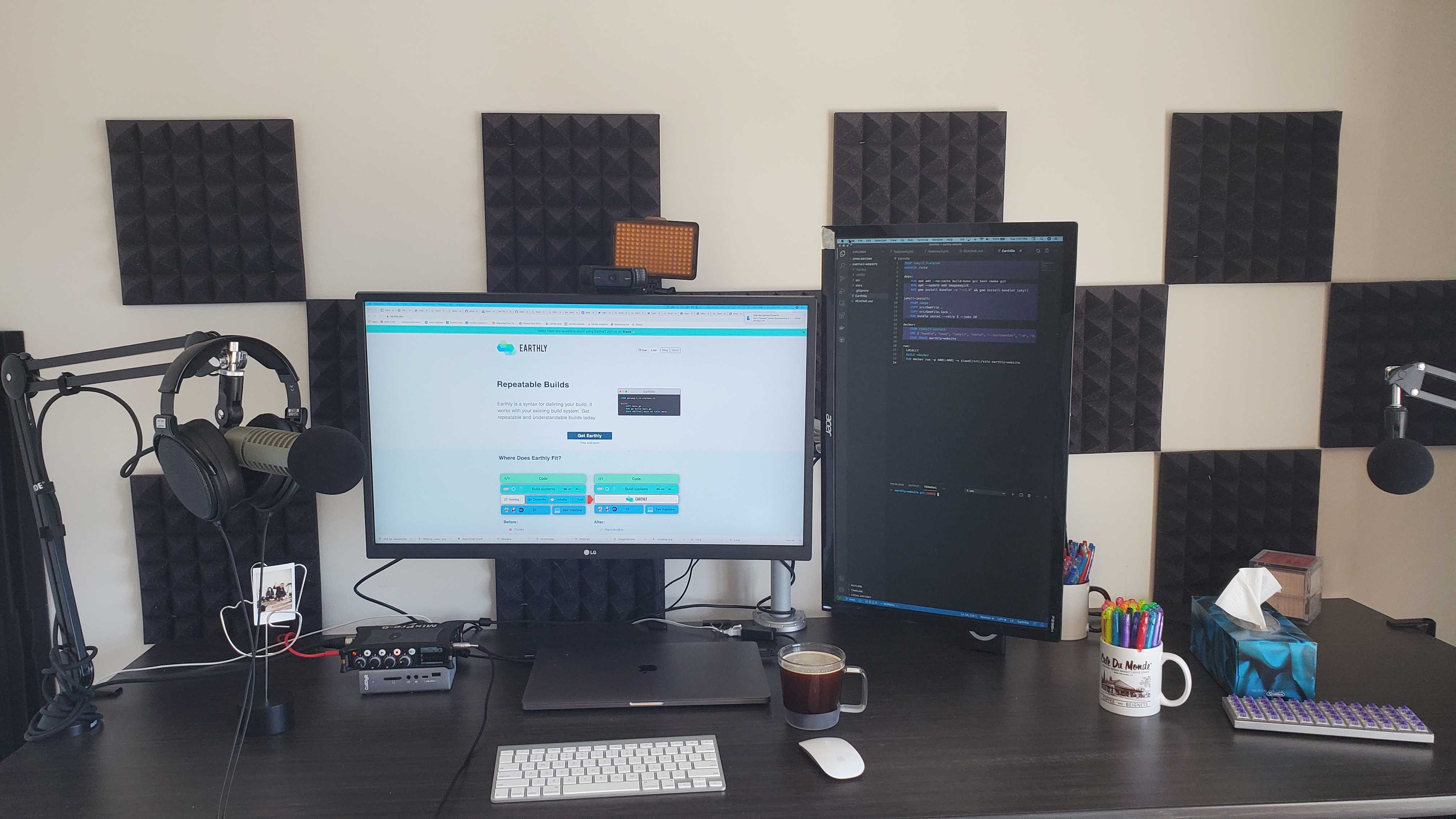 I have a custom-made standing desk. I got it from a home office place and they made it, so the legs came separately with the adjustments on, and then you could pick the top. I got the largest one they had, so my side of my room is taken up with this seven foot by three foot desk. As it’s quite large it accumulates all kinds of stuff on it!

I read a lot - fiction and nonfiction. I’m currently reading ‘Ambergris’ by Jeff VanderMeer and ‘The Soul of a New Machine’ by Tracy Kidder.

Earthly is a system for containerized reproducable builds. It was featured as an “Interesting Tool” in the Console newsletter on 11 Mar 2021. This interview was conducted on 8 Mar 2021.