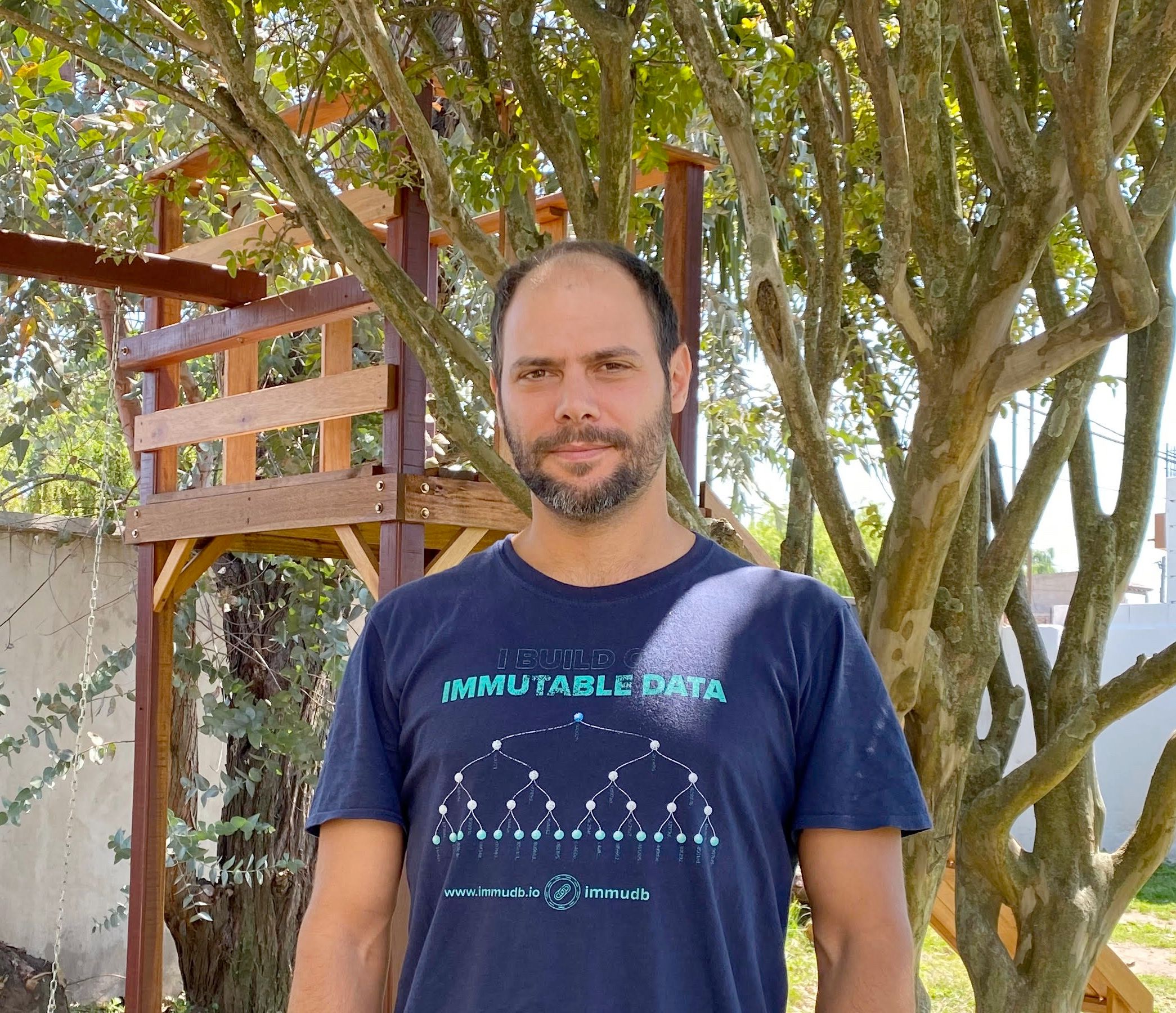 What is immudb? Why did you build it?

immudb is a cryptographically verifiable multilayer database. This is often assumed to mean immutable, but whilst immudb is indeed immutable, it’s also important to highlight that everything that is written into immudb can be verified by a client application later on.

You can use immudb for logging events which can then be retrieved by the event identifier and verified, however, immudb can be used as a standard key-value store and as a relational SQL database, with the added benefit that everything is verifiable.

This allows client apps to check whether the data has been tampered with, even if someone has access to the file system or underlying storage. This can be detected.

The database is also intended to be run by a single owner, which is one of the differences when comparing immudb to blockchain. With blockchain, ownership is decentralized, whereas immudb can run on a single server. Clients do not need to trust the server because of the underlying verification capabilities.

When I started to work on immudb, there was nothing else that allowed for single ownership with verification. The only alternative was to use a blockchain platform, but that comes with much more complexity, such as smart contracts, limited throughput, wallets etc.

Another factor was the focus on use cases. When you look at the general database landscape, none were being built from scratch with immutability in mind. Today, we see more and more special-purpose databases, however, none that I could find offered high scalability, ease of use, and cryptographic verification, as well as the ability to travel through the change data in time.

Over time, immudb users showed us lots of new use cases. For example, protecting important documents. We even know of one organization storing the last known location of a submarine in immudb running on board. That’s very interesting because there is no internet connection on a submarine, thus blockchain is not an option. But they still want to make sure everything is stored tamper-proof, so that they can retrieve the location data when the submarine is back in the harbor, and ensure that everything is still tamper-free.

I usually start my day at 7.30am. While it might be early for me, it’s actually almost noon for the majority of the team, which is distributed in European countries. So I quickly sync with them, address anything I can contribute on, check our Discord channel and GitHub repo looking for reported issues or contributions.

Most of the time I have pending work related to novel features we’re incorporating into immudb. Since we added SQL support, there are a lot of interesting and useful functionality immudb needs to support in a verifiable manner, so this has been the type of task I’ve been involved in for the last two months or so.

I’ve been working from home long before the pandemic, so my home was already prepared and I have my own home office. My daughters usually come in just to say hi or to play a little bit - if I’m not solving something that requires my exclusive attention, I spend a few minutes with them and then I continue working. As we live in a very small city - around 15,000 people - distances can be measured with the fingers of one hand, giving me the chance to bring them to school during lunch time.

During afternoons, my home is as quiet as in the first hours of the day, so I have a lot of time to make progress and extend our time-zone availability for community interaction or anything that could suddenly require immediate attention.

I spend all my time working on immudb, either thinking about new functionality or coding. For instance, adding SQL support has been interesting because SQL was not designed for immutability. This has resulted in working with customers, users, and getting feedback at the same time as exploring how it should be implemented in a standards compliant manner.

immudb is open source, so I also spend a lot of time working with the community - going through feedback, responding to issues and making sure we’re responsive to our open source community. Our discord channel has lively discussions about immudb with many community users.

I’ve always had a curiosity about computers from when I was playing games on a console - how the game was created and how the players were moving. So when I got my first computer at the age of 13, I started building a Carmen Sandiego-style game. That was the first game I implemented, all self-taught, because no one in my family was connected to the internet back then.

Later, when I was 15 years old, I started dissecting printers. Using the parallel port, I was able to move the motors. A couple of years later, I realized that I had defined a domain-specific language for specifying the coordinates the motors should achieve in order to physically shape a piece of wood. I created a language with a parser, emulated rendering and everything!

Before university, I had also already implemented a Spanish card game called Escoba de 15, which I used to play with my family when I was a kid. This was a complete game with machine learning so you can play with other players, or you can also play with the machine with different difficulty levels. That was the first time I dealt with some kind of machine learning.

I started in Basic and Pascal, once in university I moved onto functional and object oriented languages like Haskell and Smalltalk. I was mainly coding in Java during my professional career but discovered Go when contributing to the Hyperledger Fabric project. Since I joined CodeNotary, it’s my language of choice.

What has been the most interesting challenge building immudb?

In the beginning, immudb was built on top of BadgerDB, another key-value store backing a graph database. We knew that we clearly needed our own storage back-end. So this was the biggest challenge, to write a whole new storage engine. It is not so common to find a database that you can use as an immutable, verifiable log store on its own, and that works really, really fast.

What we ended up with was a system that, when we benchmarked it, could do 10 million writes per second. That’s really fast! And the storage layer is plugable - it can be a single file, multi-file, in-memory, or even backed by Amazon S3, so you never have to worry again about running out of disk space!.

Another thing is the possibility to work with eventual indexing, allowing you to store and commit data very fast. The indexing of the key will happen asynchronously. You can store extremely fast, without waiting for the index to be generated.

However, we found that this approach can be quite confusing for users, so it actually waits for the index by default. If someone wants to maximize performance, they can switch it to decouple the indexer.

What’s the most interesting tool you’re playing around with at the moment?

Well, that’s easy: immudb! I always wanted to implement a storage engine. so I find this project really interesting both professionally and personally.

Being able to mathematically prove facts is amazing and I’m convinced this capability will be incorporated in a huge class of applications in the near future.

I use a standard MacBook Pro. I find it really useful if I need to travel or move, although that’s not so common at the moment! I use an external monitor that I find really comfortable, and I miss it when I travel. It’s a 32-inch Samsung monitor. I do have a second one, but I couldn’t find any practical use of it. 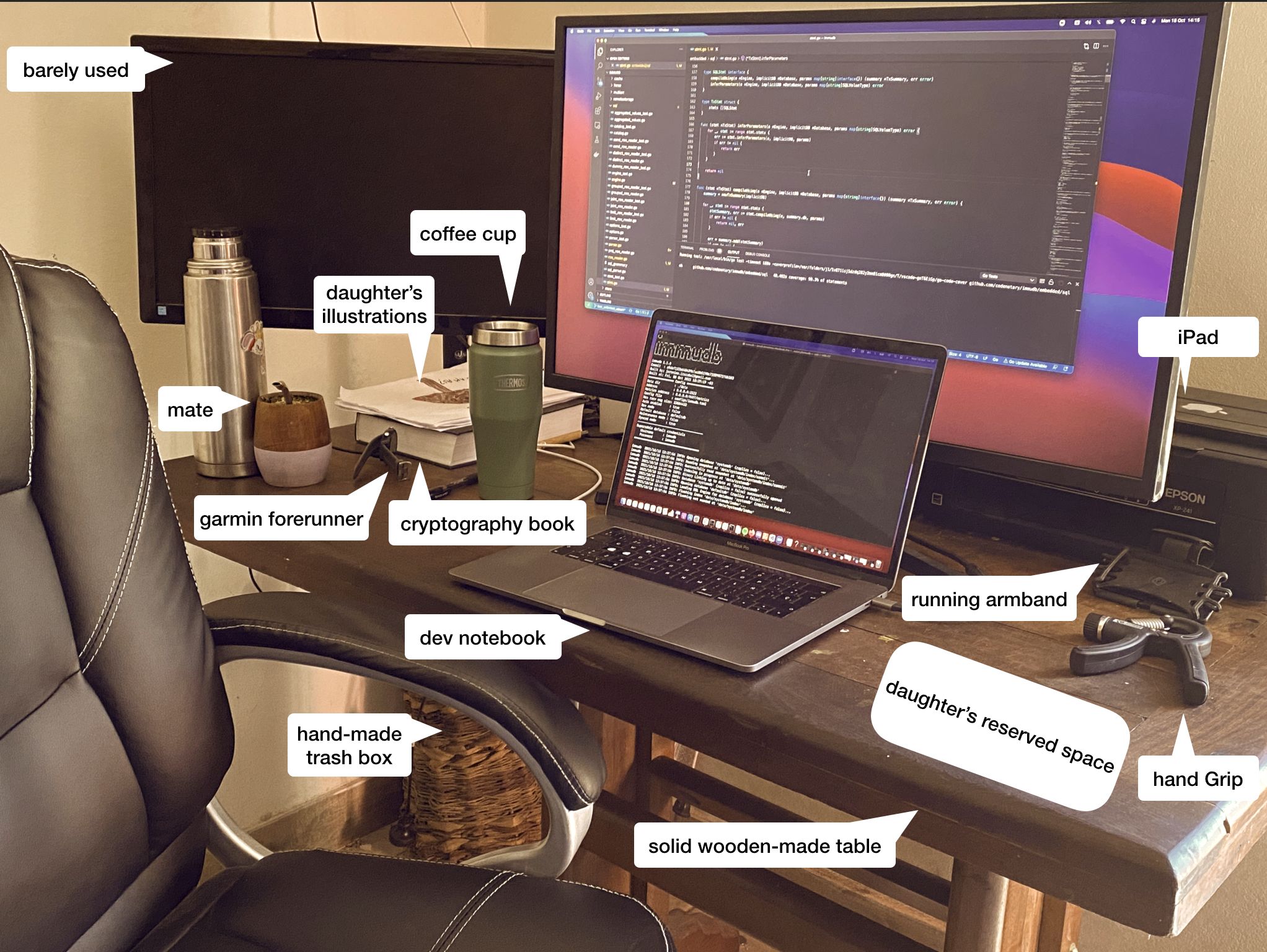 Tea or coffee? Mate and coffee.

Silence or music? Both work for me.

I practice many sports. Mostly those related to or that involve running. I used to run long distances such as ultramarathons, until a few years ago. Currently, I am mostly playing soccer and padel (a racquet sport similar to tennis).

I also enjoy riding my motorbike (alone or with friends) or the truck on field roads with my family, walking along the river and rails, and visiting small villages.

immudb is a cryptographically verifiable multilayer database. It was featured as an “Interesting Tool” in the Console newsletter on 21 Oct 2021. This interview was conducted on 18 Oct 2021.