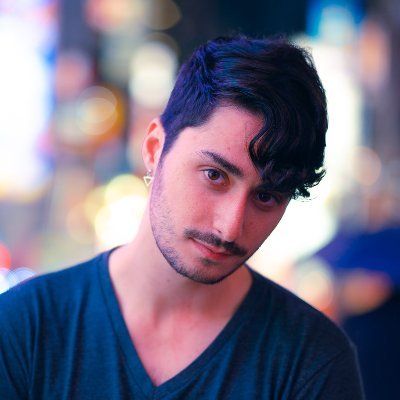 What is Starship? Why did you build it?

Starship is a cross-platform cross-shell prompt. The goal is to replace what would typically just show up as the current working directory by giving a little more contextual information that you wouldn’t otherwise have.

Instead of just showing what directory you’re in, Starship gives context, like the fact you’re in a Git repo, the current Git status, the Node package version, and your Node runtime version; things that you wouldn’t typically know without having to actively seek them out. It only shows you what you need in that context, and no more.

Starship is configurable and works very quickly on any set up. It plays nicely with most shells, like bash, zsh, fish, etc. It was directly inspired by the prompt called Spaceship for zsh. Similar name, but it only works with zsh. I was porting it over to Fish because I was a big fan, but the process required a lot more effort then expected. Outside of porting features, we were regularly backporting bug fixes from the fish prompt, back to the zsh version. The Fish port was called Spacefish, adding to the confusing mix of names!

The maintainer of Spaceship, Denys Dovhan, had made a proof of concept for what would be a “cross shell prompt” in NodeJS. This worked really well conceptually, but Node has a slow cold start time, so that didn’t work well practically. I took it upon myself to try making it in Rust, a systems-level language. The project evolved to what Starship is today, which is more than just a typical prompt, acting more as a prompt framework, so to speak. Today, Starship can be used to make any prompt through configuration alone.

It’s breathtaking to see the amount of support that there’s been around Starship, and humbling to see what started out as a small learning opportunity for Rust to surpass 15,000 GitHub stars. People are now looking to monetarily support us, which is very exciting.

How was your experience building Starship in Rust?

I am loving developing in Rust. It is the language I would like to do more and more of my projects in. Rust gives you a level of confidence and safety that other languages simply don’t provide. Also, it’s so inherently fast. Going back to JavaScript from Rust, I feel like a much safer developer. It makes me more mindful of where things can go wrong, giving me a better mental framework for how to handle possible errors. In Rust, the compiler yells at you – it’s hard to do things the wrong way.

Funnily enough, prior to Starship, I had never touched Rust or systems programming. When tackling the idea of making a cross-platform shell prompt in a systems programming language, I had considered using C, Go, or Rust. At the time, Rust had been the number one most loved language in the Stack Overflow annual survey several years running. I saw the interest in Rust and thought that this was a really good opportunity to give it a shot and see what all the hype was about.

As far as projects go, Starship is not terribly complex. It checks for the state of your system and outputs a string. The complexity is in how it interfaces with the various shells and how it handles the various system states that it has to deal with. Luckily, Starship was a very approachable project for learning Rust, at least given its scope at the time. Today it’s a lot bigger and is more of a framework than a prompt, making it much more complex in design.

‘Learn Rust’ is my message to everyone. If you get the opportunity, it makes you a better developer, and it makes you reconsider the norms in your current language of choice.

What’s the team around Starship?

Starship is an open-source project. We have a team of four maintainers and a few dozen drive-by contributors. People add their language of choice, or their tool of choice that we previously didn’t have support for. We made it fairly simple to add a new language, with a lot of good tests and documentation for contributors. This allowed people to start contributing, even if they know little to no Rust.

It was very important from its inception to make Starship approachable to contributors, and this lends itself well to having a snowball effect. If you find a prompt that supports all the tools that you use in a working day, it’s probably a good fit for your workflow.

I just started at CodeSandbox, where I’m a software developer working mostly on the core product. Once I’ve finished my 9-to-5, I usually work on open source and side projects like Starship.

I’m also a developer and community manager for a social network for anime fans called AniList, which is another side-project of mine.

I’ve always taken an interest in programming. As a kid, I was a huge fan of video games, and I always aspired to be a game developer or something along those lines.

I’ve always played around with coding, starting out at school with my TI84 in mathematics class where I’d spend time programming, instead of learning trigonometry!

I eventually ended up doing software quality assurance for games companies. This role progressed into dabbling with automation, and then going on to become an automation QA engineer at Shutterstock, then Autodesk, before finally becoming a full stack developer at Auth0.

My primary tool of trade has always been JavaScript. I started with Python, then progressed to JavaScript, and I’ve been using JavaScript professionally ever since. Even now at CodeSandbox, I work in TypeScript primarily and use Rust in my open source projects.

What is the most interesting challenge you’ve faced working on Starship?

Since its inception, the scope and complexity of Starship have shifted considerably. We are teetering on the brink of a full rewrite right now, as the architecture does not suit the needs of today. People are thinking of it more as a framework than as a prompt itself. With every new tool and bit of configuration, there’s another thing to have to maintain and test, adding to the project’s overall complexity.

The biggest trouble in developing Starship has been maintaining performance while supporting features in Git. Git is not the fastest software in the world. I made the decision early on to make Starship using libgit for it’s Git implementation, which I didn’t know at the time, doesn’t perform very well for our purposes.

Given our use-case, libgit performs considerably worse than calling the Git CLI directly, which would have been the better choice in retrospect. In the process of rewriting Starship, the plan is to strip out the use of libgit and instead create our own Git implementation, or call out to the git CLI, which would make Starship orders of magnitude faster. This is our project’s single biggest performance bottleneck.

That said, most people don’t notice any performance issues. These edge cases only show up under extreme examples of users cloning massive projects, like the Rust repo or Chromium. People regularly praise Starship for its performance when compared to typical prompts that don’t use concurrency and are written in the shell language itself. By writing the shell in Rust, we gain the benefits of a robust concurrency model, test tooling, and cross-platform support upfront.

We run benchmarks whenever we’re making meaningful changes. In the rewrite, the plan is to have benchmarks in CI from the onset, like we’ve always had for tests and documentation. We now see that having a performance budget from the get-go is very valuable to avoid gradual regressions over time. Having had such a system early on, we could’ve quickly caught the regression introduced by libgit, back when.

Recently, I’ve fallen in love with Nix and NixOS. I recently had to set up a new Mac, and instead of installing everything with Homebrew, I used Nix packages for everything. This makes my system very easy to reproduce through configuration alone. Nix allows my system configuration to be idempotent, allowing me to confidently replace tools and configuration on my system without risks of side-effects. It provides what a lot of people are looking for in Docker without the heavy weight of virtualization.

That said, I’m still very early in my Nix journey. I have been avoiding creating my own Nix packages. What’s cool, is to see that the Nix Starship package makes it incredibly easy for anyone to just install it. It’s also pre-configured for any shell that you install with Nix. That kind of unification of tooling and automatic configuration is fascinating to see, so I’d love to continue experimenting with it.

OS: macOS, Big Sur. I upgraded to Big Sur back when it was still in beta. I’m in love with the new design direction of Big Sur. It looks absolutely beautiful. It solves a lot of usability issues that were in macOS that aren’t there anymore.

Browser: Chrome. I’ve wanted to use Safari for a long time, but the extension support in Safari is kind of dismal. I like Brave conceptually, but the execution has left me wanting.

Email: FastMail. A couple of years ago in an effort to separate myself from Google I stopped using Gmail. I’ve been using FastMail ever since, and it has been fantastic. FastMail has really good integration with every external email and calendar app. It feels just like I’m using Gmail when I’m not using the Gmail client, which is what I wanted out of an email provider. As for an email client, I’ve been using Spark on my Mac and on my Apple devices, super slick, super fast.

Chat: Slack at CodeSandbox. Discord at Starship and AniList.

IDE: VS Code. The extension ecosystem is super rich. It’s refreshingly easy to make an extension and modify your editor, in a way that hasn’t been the case for Vim. Within VS Code, I use the Vim extension, giving me the same ease of use and ergonomics provided by Vim, while also having access to the rich ecosystem of VS Code. 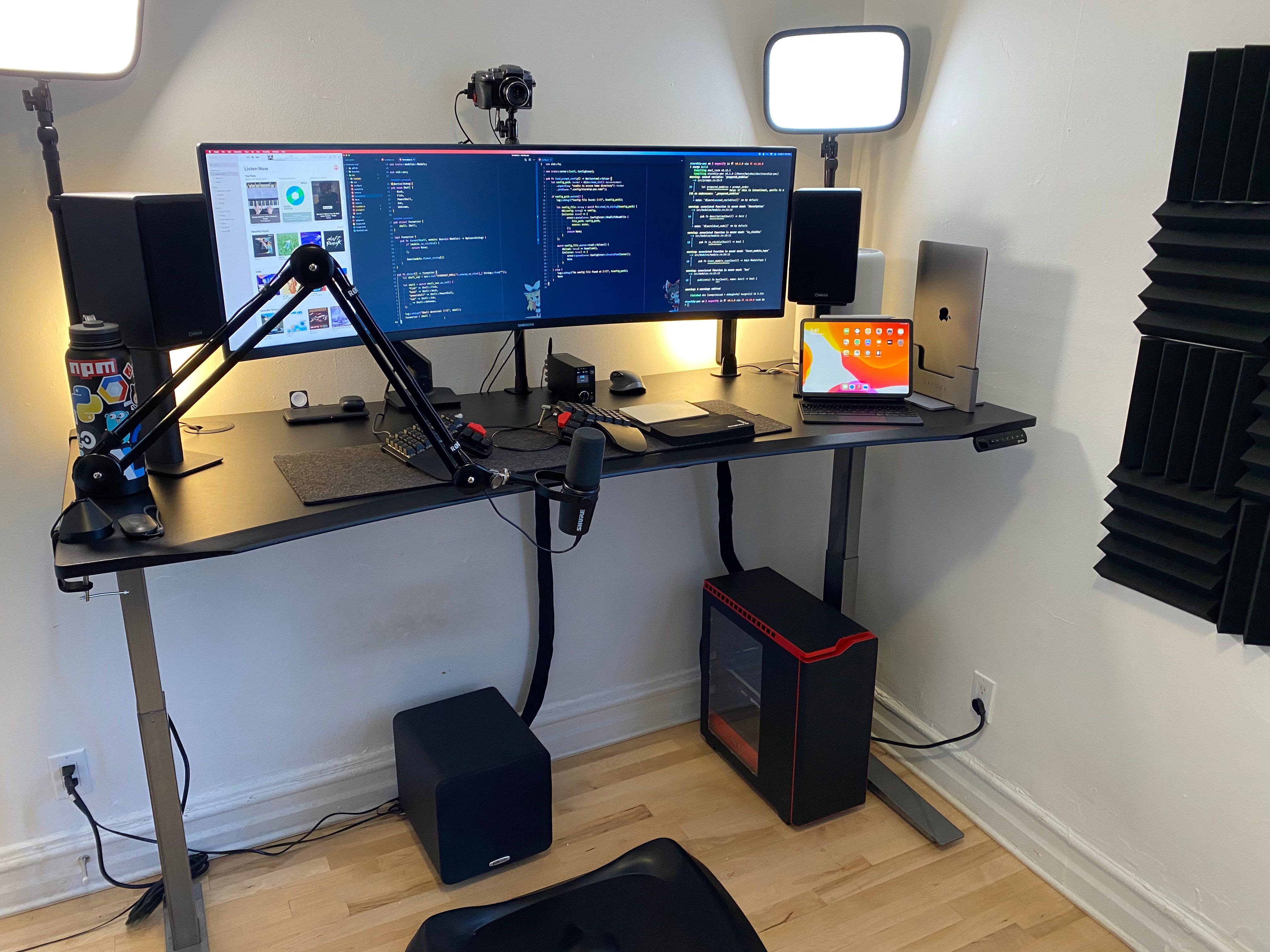 Just a couple of days ago, I tweeted about how I reached my workstation “end game”. It’s now exactly how I’ve wanted it to be for a long time.

I’ve got a lovely Jarvis EcoTop standing desk with a Herman Miller Embody Logitech Edition chair. I use a Macbook Air (M1 Chip) in a Brydge vertical dock, so I slot it in and it connects to my ultra wide 49" Samsung CRG9 Dual QHD monitor with an Ergotron HX monitor mount.

On either side, I have Micca MB42X speakers, then I use a Lumix DMC-G7 mirrorless camera as a webcam connected to an Elgato CamLink 4K for video capture. My keyboard is a ZSA Moonlander, which has helped alleviate the chronic wrist pain I used to suffer from. Lastly I use an Apple Magic Trackpad as a mouse which, again, is more comfortable to use.

Lots of video games, but I’m still at my computer for that. I’ve been playing League of Legends, Call of Duty, and visual novels as of late. When I’m not at my desk, I do a lot of biking, rock climbing, and hiking in the summer, along with skiing in the winter.

Starship is a cross-shell prompt. It was featured as an “Interesting Tool” in the Console newsletter on 7 Jan 2021. This interview was conducted on 9 Mar 2021.