CEO, StepZen - GraphQL as a service. 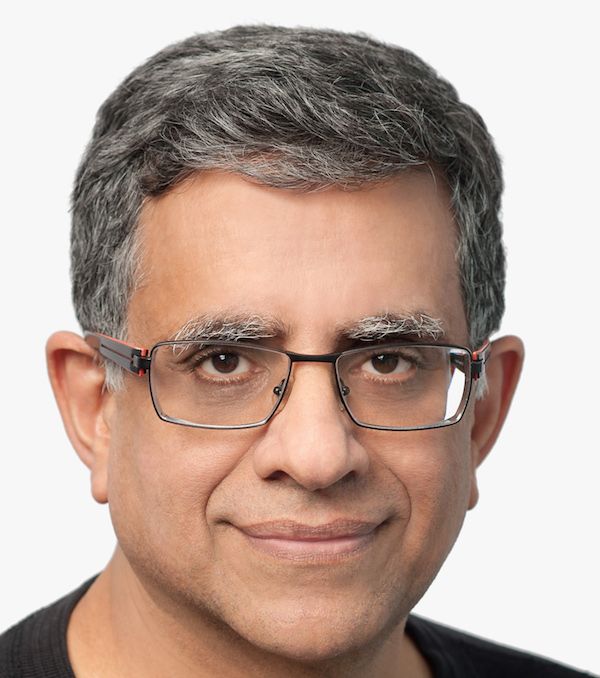 What is StepZen? Why did you build it?

The reason we decided to build StepZen was quite simple. Myself and my co-founders had previously worked on Apigee, where we got a chance to see customers and developers move through their API journey. We saw it took some time for people to figure out why the APIs were important, but once they got them, it didn’t mean that they actually built them fast. Time and time again, the front-end devs would say, “Can I get an API for X?”. The backend team would say, “Got it. We know you need it, but give us three months or six months, because our next quarter is spoken for”.

APIs were not being developed at the rate, pace and speed at which they needed to be for people who were using the APIs to build an awesome experience. The reason for this was there was too much required to build them out - define the schema, figure out the methods, set up the backend, handle errors, set up caching, deploy to production…

We’ve also had two other ‘aha’ moments. Firstly, while REST APIs were interesting, now front-end teams were clamoring for a GraphQL API. Secondly, while building an API is exciting, the real pain is in running, managing, scaling, and optimizing. We thought, can we run an awesome service, so that people assemble their API, give it to us, and then we take care of everything else?

That is our vision for StepZen. Reduce the friction between the front-end teams wanting stuff and the backend teams being able to deliver it. To do this, we are bringing some magical techniques to the world of GraphQL API creation and operations. Developers can point StepZen to their backend - SQL, REST, SOAP, whatever - and we generate a GraphQL API for them, fully managed with high performance and reliability.

Interestingly my co-founder Helen and myself are the furthest West of all our team. Everybody else is to the east of us. Some in the middle of America, some in Florida. Sridhar, our co-founder, is in Liverpool, UK. We’ve also got some key employees in Finland and the Netherlands.

This means my mornings are jam-packed. Luckily, I’m an early riser, but until about 11ish, I’m in meetings. If you look at my calendar and you only look at the afternoon part of my calendar, you’d say, why don’t you do anything. The afternoons are less packed and I have some think-time and doing-time. I like it because it just enables me to focus on not just coding, but writing. That’s how I love it.

Do you still get to spend time coding?

The act of coding is the closest that many of us will come to creativity. You imagine something and you produce something. It is magical that you can single-handedly, or with a small team, actually create something. I remember so many ‘aha’ moments in my life. That passion has always been there. Sridhar, who runs engineering, doesn’t want me near production level code now, but we have a set of experimental repos where I can experiment.

I try to keep myself technical and programming all the time. In addition to programming, there was a lesson that my PhD advisor taught me, which was that you can do awesome stuff, but that is just for you, ultimately you should also inspire others within your team to do great work.

The act of inspiration means taking your thoughts and communicating them effectively. I have taken that on board. I still get a B grade in it, I don’t get an A grade in it, but I take this responsibility really seriously. Communicating in various forms, conveying my passion, conveying why we are doing stuff, and getting the ‘aha’ moment for the developers, so that they even pay attention to us is important to me.

It is great to hear from developers who say, we read everything that you do, and we love it. My philosophy is don’t just do good work, make sure that other people embrace that passion. That’s what I try to do in the afternoon.

We’re very flat. We’ve got seven core engineers, and another six of us are focussed on developer advocacy or spending time on the business. I am lucky to have, as my third co-founder, Helen Whelan, who ran marketing for Apigee. It is great to have somebody who’s fantastic at making sure that we can do the right things with respect to developers and customers.

When I was doing my undergrad at IIT Delhi, I was studying electrical engineering and I was fascinated with computers. When I got a chance to do my bachelor’s project, I was incredibly lucky to have an inspirational advisor. At IIT we had BBC computers, and using BASIC, with my professor’s advice, we built a core database system.

Imagine building a database system that would fit on a floppy, the data and the database system. We were able to send that database system to many schools and got people interested in the fact that data and collecting data and accessing data is important. Doing this I realized I can have fun doing it, but it can actually make a difference.

After that I spent time working in C. I never got into object oriented programming because I found the Java model too clunky. I moved into Python and more recently, Javascript and Go. We do a lot of work with JS, but my go-to languages are C and Go.

What is the tech stack for StepZen?

Our backend is mostly Go, but some disconnected services have to be really high performance so are written in Scala. All the front-end and the CLI are all JavaScript tools.

What has been the most interesting challenge building StepZen?

Our starting inspiration is that before Google search came around, with something like AltaVista, Lycos or Ask Jeeves, you had to really know how to structure the queries correctly. Google came about and managed to solve an incredibly hard problem with Page Rank, but offer an incredibly simple user experience.

The ‘aha’ moment was when Sridhar showed me “movie theaters in Santa Clara”, and it came back and said, “Do you mean movie theaters near Santa Clara?” It figured out what I was looking for. Similarly, we don’t want to impose the burden of complexity on the end-users with StepZen.

Similarly, there are some incredibly hard problems to solve with respect to backend protocols, performance optimization, caching, and how this backend speaks with language X and language Y. Can we solve all of those hard problems and make it incredibly easy for developers to actually program around it? In my mind that is always a tough challenge, because engineers want to solve hard problems perfectly, and then worry about what the implications will be for the people who actually use them. Getting both of those trains to go in parallel has been a lot of fun, but a big challenge.

GitHub Copilot is interesting. I’m not a fan quite yet, because I find that it gets in the way almost as often as it helps. As with any of these helper tools, you’ve got to figure out the right working model and the right mode. When it works, it’s mind-blowing.

The other things I am fascinated with right now are the tools that help StepZen to succeed as a business. Building a business we have to find and sell prospects. At this stage, you don’t have a sales engine. What is the tech that will enable you to sift through and understand? It really is about data integration. What does that company do? Have they posted some jobs including GraphQL? Do they have an API story?

I’ve recently started using Apollo.io. It is mind-blowing how well it integrates with LinkedIn and brings all of these things in. I know behind the cover, they’re doing something similar that we are trying to do as a horizontal platform. I find the notion of integrating data, and that it helps me to actually better prospect, absolutely fascinating. It’s a product that I’m using as a business user, as opposed to as a technical user. It is fascinating.

I’m a two-finger typist. I never learned how to type then I got Carpal tunnel once. When I saw the doctor, he said don’t learn to type, because the slower you type the better! So I’ve got a simple keyboard setup. I use a MacBook Pro 15-inch, and am completely into Mac . I just absolutely love it. I love how simple Mac is. Mac gives me a real shell, as opposed to a fake Windows shell.

I like to have a full monitor here and at home. Right now at work, I have a wireless setup. It’s a basic setup with tons and tons of memory on my laptop. 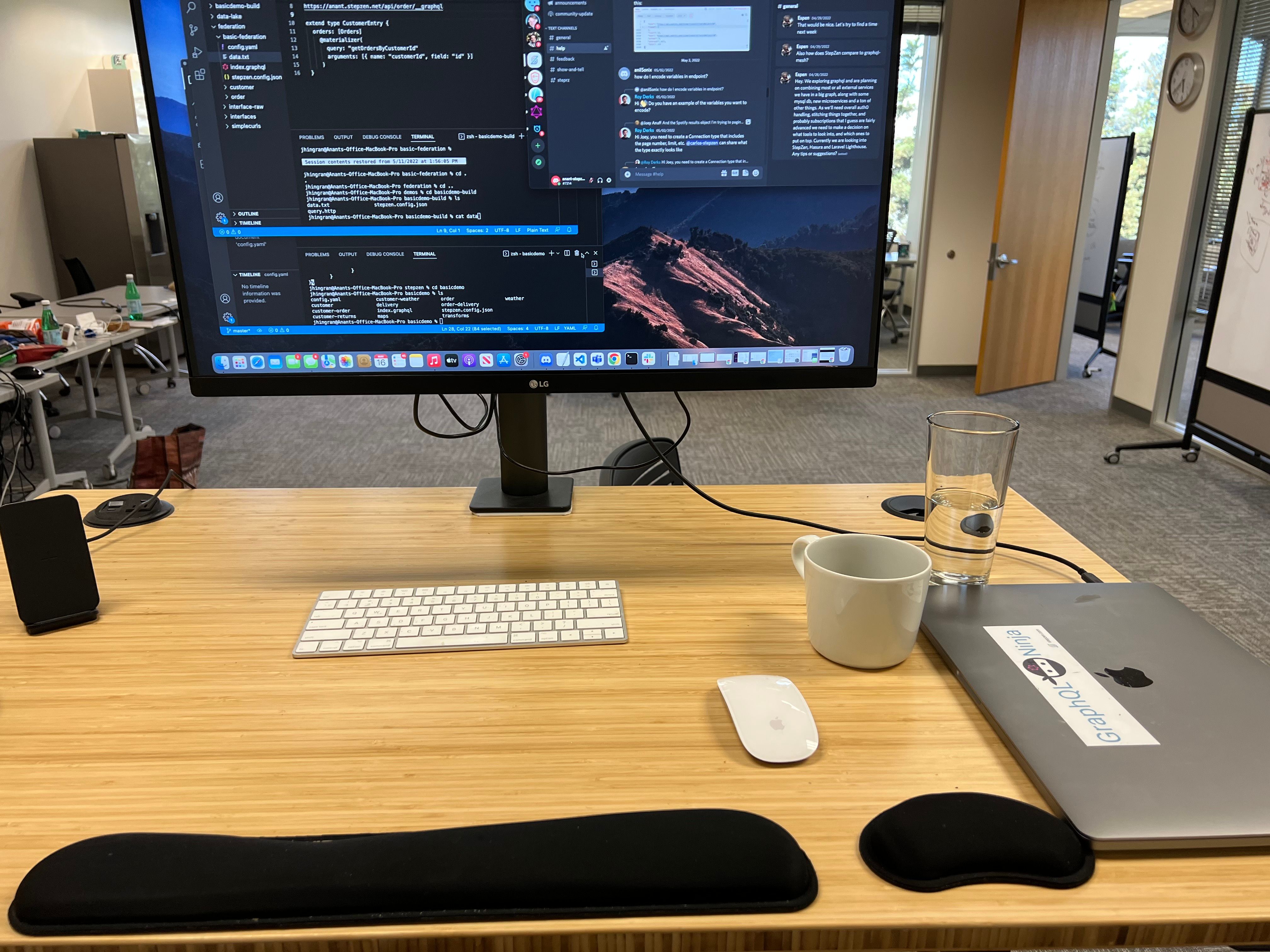 I have a fancy standing desk, but I don’t stand enough using it. It was definitely worth the investment. In our conference rooms, we have standing desks too, and I try to always stand when in meetings. Taking care of yourself is as important as taking care of the business.

I’m a bit of a crossword puzzle aficionado. I have a couple of apps, including the London Times app. My wife and I compete against each other in Wordle and Spelling Bee.

I also love reading. Typically, popular science or reading about Web 3.0 or reading The Economist or the New Yorker. Lastly, I love to spend time with my family.

StepZen provides GraphQL APIs as a service. It was featured as an “Interesting Tool” in the Console newsletter on 19 May 2022. This interview was conducted on 12 May 2022.