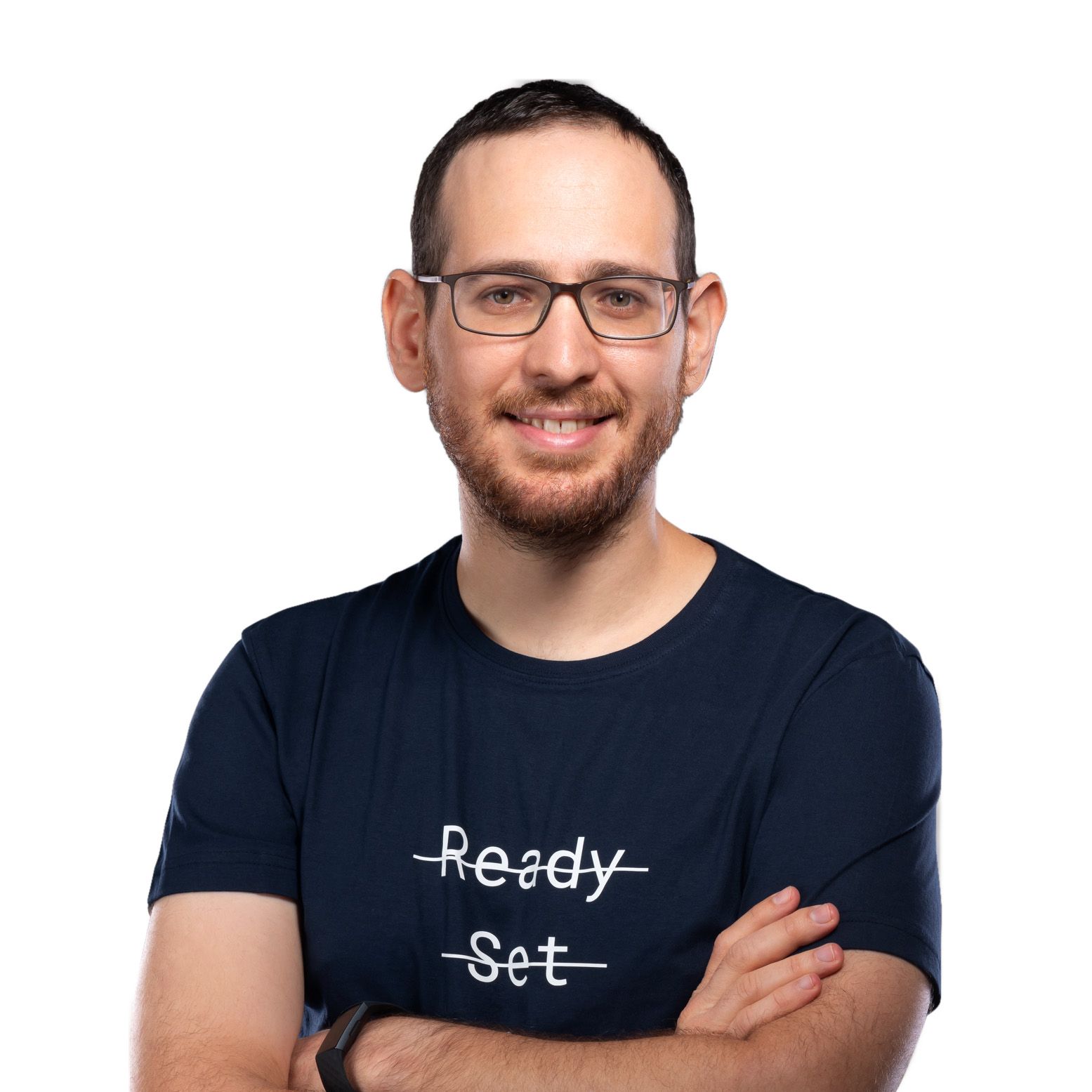 What is Swimm? Why did you build it?

Swimm is a platform for continuous documentation. It allows developers to create, find, and maintain documentation that is helpful and practical. We call it Walkthrough Documentation. With Swimm, documentation becomes a part of the company’s development workflow, and Swimm is the only platform that makes sure that documentation is always up to date as your code quickly evolves.

We built Swimm to solve some of the biggest pain points that many companies face relating to knowledge sharing, and specifically sharing knowledge about code. Those pain points happen at many different points in the life cycle of development. They occur when companies onboard a new developer, when developers switch projects, and when you need to work on some new part of the code that you haven’t written yourself - or that you wrote a long time ago and forgot.

This happens all the time. When you need to understand code, poor documentation can limit agility within engineering teams and the company’s velocity overall to reach the business goals. With Swimm, our users create Walkthrough Documentation- documents that are code-coupled, which means that they explicitly reference parts of the codebase.

Imagine a document with text and references to the code, such as complete snippets of code, a path, function name, or names of variables. Swimm creates a very vivid experience - like having the engineer who originally wrote the code sitting right next to you, walking you through it. That’s why we call it Walkthrough Documentation. We developed a methodology of what we call Continuous Documentation, which is creating, maintaining, and integrating code documentation into the normal development workflow.

How does a developer interact with the code & the docs?

There are two ways to read Swimm documents or find them. One is within the Swimm app - a web app that allows you to search for a document as you would on other platforms. The other way is that you can actually find the document from within your IDE while working on the code.

So it works as a plugin for VS Code and IntelliJ etc?

Exactly. Currently, we support all JetBrains products and have a VS Code plugin. We also have integrations for CI/CD providers like GitLab and GitHub.

The document itself lives within the repository, so everything is version-controlled.

How have developers been solving this problem before using Swimm?

There is a lot of variance in terms of how developer teams approach the problem of knowledge sharing. Some teams just choose not to invest time in documentation. I think it’s because they can’t be bothered since it’s soon going to become obsolete anyhow. Code evolves so quickly so that documentation that is not coupled to the code base just becomes irrelevant.

Developer teams pay the high price for not creating documentation, both in agility and because they put themselves at a high risk of knowledge loss - especially when a certain team member has left, which happens very often.

It is hard for developers to know how to start writing documentation that is practical and that makes sense for developers. Because the code changes so fast, they usually don’t describe what’s actually happening in the code because they know it’s going to become obsolete.

They tend to either create high-level documentation which describes the big picture but lacks the vital practical implementation details, or they just put inline comments which tell only the very specific details of this specific line of code and don’t explain the full story. Sometimes developers write documentation that explains the code and the full flow, but it’s not coupled to the code, and then it becomes obsolete. We heard from many developers that they read those documents, lose their trust in documentation, and then don’t bother to read current documentation and don’t go on to create additional documentation.

We’re striving to break this vicious cycle by creating documentation that is both more straightforward from the code itself rather than from a blank page and trying to fill it up with text. We also make sure that the documentation is up to date, and we help you find it when you need to within the IDE while working on a feature or fixing a bug.

It has changed a lot recently. When we started working on Swimm two years ago, I was one of the four co-founders. I was implementing the initial versions of the platform. This involved working with clients and working on fundraising. It was a combination of talking to clients, design partners, working with investors, and of course, implementing the code. As we grew, I became a team leader of a small team of developers and gradually became responsible for two teams.

At the moment, I’m focused on creating unique technology for Swimm. This involves researching and finding innovative solutions that will take our vision even further. My days are quite bimodal, either packed with meetings that concern the strategy of the company or mentoring some of our engineers - especially in areas of the code that I was heavily involved with implementing or designing myself. The rest of my time is dedicated to research.

What is the team structure around Swimm?

The second squad, the adoption squad, is responsible for the adoption of Swimm within the company’s organization. They make sure we’re able to expand to additional users and teams. The integration with GitHub and the IDE plugins that I described earlier is an example of their work. Their focus is on how users experience updating documentation in a way that is embedded within the development workflow.

One flow would include a user that doesn’t know Swimm in the organization, issues a PR request, and finds out that their documentation is now outdated. Swimm will help fix that by showing what is out of sync, suggesting what to review in the document.

When I was in 10th grade, I took a Pascal course. I don’t even remember how I heard about it. I think my parents may have sent me there, but I really liked it. I loved learning how to create small games. Of course, Pascal is not so useful nowadays, but it was a good starting point. I got into software much more seriously when I accidentally installed a virus on my machine when I was in high school, and I tried to remove it. It was hard to remove, and I got to dig deeper into it.

I started learning about malware, how to perform malware analysis while still in high school and got more and more into that. I ended up starting my own online forum to help people remove malware from their machines at home, just for fun. That used to be my hobby. Later, I served as a developer and researcher in a technological unit as part of our obligatory military service in Israel, which is a common route for Israeli entrepreneurs.

I stopped with Pascal quite early, though we did use Pascal for the high school exams. Next, I got into C, C++, Python, and even Assembly for a while. Later I shifted into JavaScript and TypeScript.

For the web app, we use NodeJS with TypeScript. Our frontend is implemented in Vue.js. We use Firebase, Firestore, and GCP. We also have a GitHub app and various IDE integrations, and we’re gradually adding more and more components. We do have some microservices that are also different. We also used to have a desktop application that uses Electron.

For the documentation itself, we have our own format called sw.md, which is basically a Markdown file with some extras. This means you can consume it from anywhere, even without using the Swimm app - but then when you read it in Swimm, it adds a lot of cool insights and enhances the experience.

For example, if you see the name of a variable, Swimm would tell you exactly where it’s embedded, where it was declared in the code, and if it changed. If the variable was renamed since someone wrote the document, we show you the previous name versus the current name and why we still think it’s the same variable - and that you should update it accordingly.

What is the most interesting development challenge you’ve faced working on Swimm?

The most interesting recent challenge was finding a solution to automatically update the documentation in a way that makes sense for developers. It’s something that many people told us, in the beginning, would be impossible. You’re either going to make something that’s very specific or something that just doesn’t make sense.

We wanted to find a solution that supports all programming languages. We had to understand a lot of Git internals and look at a lot of data, especially with our first design partners, to gain the right insights and create an algorithm that works across all languages. Finding the right algorithm and then implementing it in a way that would also be efficient and also something that makes sense to the user was an interesting challenge to solve - both technically and product-wise. It also ended up being Swimm’s first registered patent.

What’s the most interesting tool/product you’ve been playing around with recently?

I got to play with the GitHub API to make sure we render only the relevant changes from the pull request. Libraries such as libgit have been useful in that case.

Technologically, it’s really interesting, but also from the product’s perspective, it becomes a really good starting point for a document because you start with actual code changes. When you’ve just introduced those changes, everything is very fresh in your mind as it is something you’ve just finished implementing as opposed to something you created and implemented a few months ago.

I have a Lenovo ThinkPad with a Dell widescreen monitor, a wireless Microsoft keyboard and mouse. I also have a Yeti microphone. My phone is a Google Pixel 6. You’ll most likely find the small espresso cup by my keyboard at all times. It’s essentially a part of the computer setup, I guess. 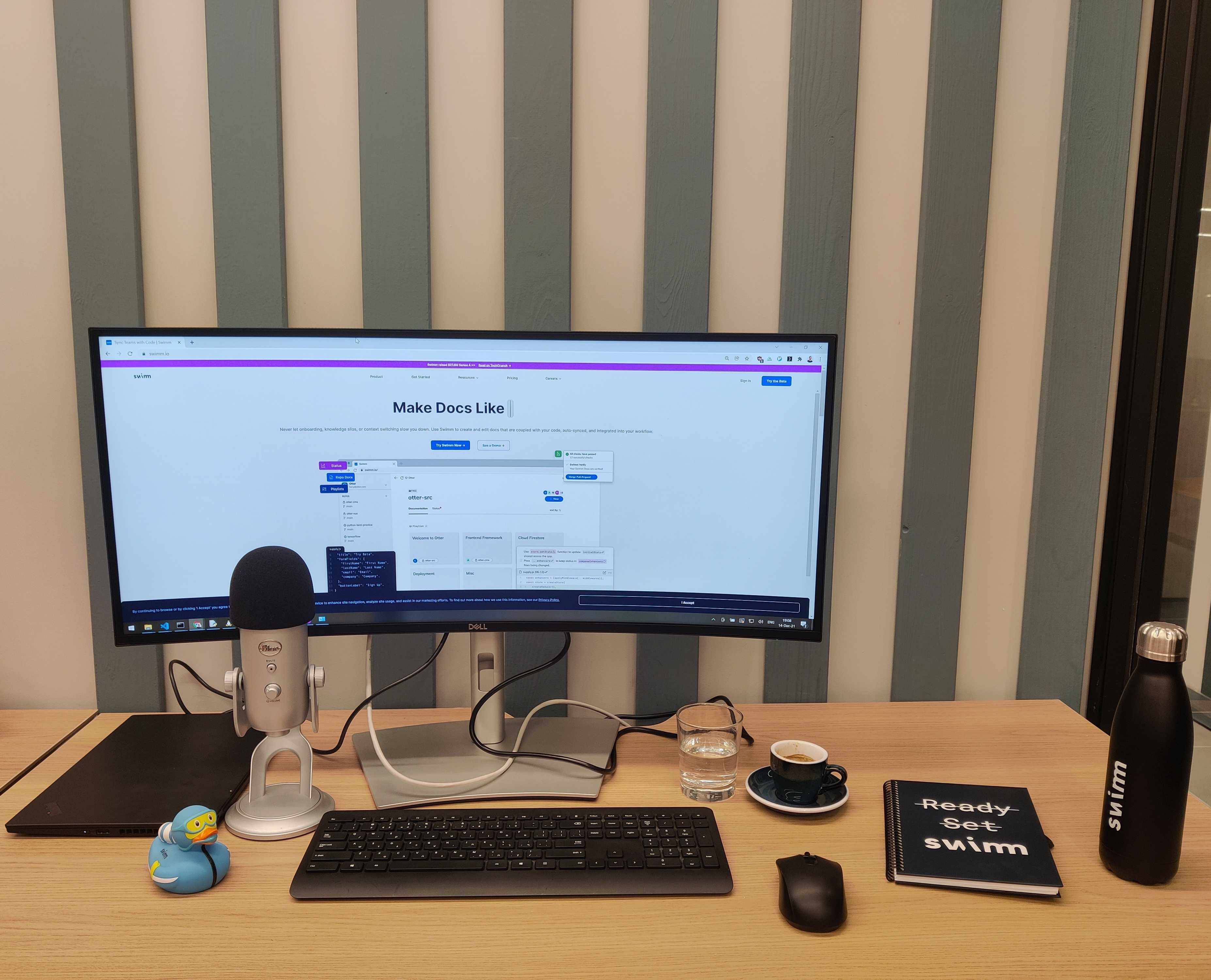 IDE: VS Code and IntelliJ products.

Are you based in an office?

We are hybrid now post-COVID. Everyone is at the office at least three days a week, and then we have two days where people choose to work remotely or from the office. I do both.

When we started Swimm, our first employees onboarded during the first lockdown. We were onboarding using Swimm for the first time, which was a very cool experience. We’re very lucky that we get to use Swimm here on a daily basis. Every employee who joins Swimm goes through onboarding using Swimm. And on a daily basis, the team gets to create and share documents written by Swimm.

Tea or coffee? Coffee. At Swimm, we have a small coffee shop within the office called Caffe 7 because it used to be the RGB for our initial brand colors: C-A-F-F-E 7.

I like having coffee with people and making my own coffee. Coffee is definitely a hobby. I also enjoy taking walks, especially with my wife and my dog.

I also like creating content for people to enjoy. I got to write a textbook about computer networks, and I also have a YouTube channel where I post mostly about Git or computer networks. I also play freestyle Frisbee and enjoy reading books.

Swimm is a platform for continuous documentation. It was featured as an “Interesting Tool” in the Console newsletter on 20 Jan 2022. This interview was conducted on 13 Dec 2021.