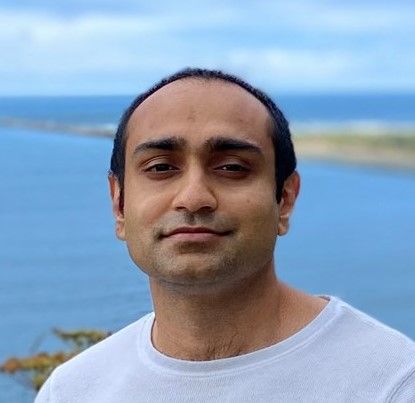 What is Temporal? Why did you build it?

Temporal is a workflow orchestration platform. It deals with everything needed to run a task - reliability, retries, redundancy - so you can focus on the task itself.

I met the CTO, Samar, at Microsoft where he was building a code replay workflow engine. I was initially skeptical of its value as I thought anyone could write their code to persist checkpoints and deal with retries. However it turned out to be much more complex at scale! We ended up using this engine quite a bit at Microsoft, such as for Azure resource provisioning.

Samar met our CEO, Maxim, at Amazon where they were working on the AWS Simple Workflow Service. However, the three of us actually met ten years later at Uber where they had created an extensive workflow engine called Cadence. Our team was using Cadence for compliance workflows and it was this that highlighted the real value: checkpoints, handling messaging and state management across multiple systems. It meant we had to write less code.

This is what inspired Temporal. We wanted to build something that any developer could use, whilst adding extra functionality around execution history, logging, debugging and analysis of past runs.

How have you thought about open source vs cloud?

One of the main things I’m working on at Temporal is the cloud-hosted service. You can host everything yourself but it really requires a lot of operational experience.

Operating a Temporal cluster requires dealing with upgrades, making sure you’re scaled appropriately and debugging potential issues. This will take a team of five to ten people. We’ve spoken to other companies who’ve said, “Hey, let’s try self-hosting.” They’ve gotten the estimate and they’ve come back and also said, “Yeah, this will take too many people. Can you host it for us?” People want to use it, but they don’t want to run it. Just like people want to use a database, they don’t really want to operate and run it themselves.

I joined Temporal in the middle of the COVID-19 pandemic, so I’ve only physically met all my co-workers once at a summer barbecue (wearing masks!). I’ve been remote from the day I joined. We have a daily standup and sub-team standups, then there’s some structured meetings, along with a lot of organic ad-hoc discussion.

A lot of my time is spent working on greenfield projects, which is what I enjoy most. We’re building brand new things, so there is a lot of learning and exploring. Creating new things versus dealing with and patching up legacy systems. That’s what makes it really exciting. I was the eighth full-time employee, and right now we’re a team of twenty people.

As we are a remote first company, our toolset and our development process is oriented around that. We do bi-weekly sprint planning and sprint-close retros. We use Notion, which has been really good for collaborating. We do all our task management in it, and all our notes and design documents live in there.

My dad was a software engineer. Growing up, in addition to teaching me math, he introduced me to computer science. I realized I was really into computing when I just started to break stuff. My mom had a PhD thesis on her Tandem computer, which I accidentally formatted when I was seven years old…she was not happy. I remember that day vividly!

In middle school (before malware detection was a common thing in the late 90s) I found some keylogger software. I put it on a school computer and lo and behold, anything that people typed, it would just stream to a text file. To prank some friends in middle school, I installed it and got into a significant amount of trouble.

My first programming language was QBasic, then at high school I moved on to Java. In the US there is an advanced placement curriculum course you can take that was pretty much all in Java. At Microsoft everything was .NET and C#. At Uber, it just happened to be Go. I am most comfortable with those two languages: Go and C#. I also know Python and sometimes play around with some bash scripting.

I always knew that I liked messing around with computers, breaking them, and then hopefully fixing them. Along with my dad’s influence, that is how I got into computing.

What is the most interesting challenge you’ve faced working on Temporal?

When I joined Temporal we hadn’t released v1 of the open-source product yet. The first priorities were focussed on stabilisation, fixing bugs, stress testing and validation etc.

One of the issues we faced was dealing with an activity heartbeat. The idea is that you launch Temporal and it deals with the task management. If the machine running a task dies then the heartbeat timeout expires, and Temporal knows that the machine that was running the activity has probably died. We noticed that during high load, the heartbeat would expire but the task wasn’t getting rescheduled to another machine.

Solving this problem required me to go extremely deep into the task dispatch logic, getting into the Cassandra persistence layer and piecing it together from the bottom up. We discovered the issue reproduced on a Temporal server reboot. The timer deduplication logic was incorrectly dropping certain heartbeat timers on server startup due to an initial cursor value that was too high. The fix was simple - on reboot, set the cursor value to zero, as it’s okay to initially process duplicates. Figuring this out was challenging, but incredibly satisfying.

There are three engineering teams at Temporal, and they use different technology suited to the use cases: 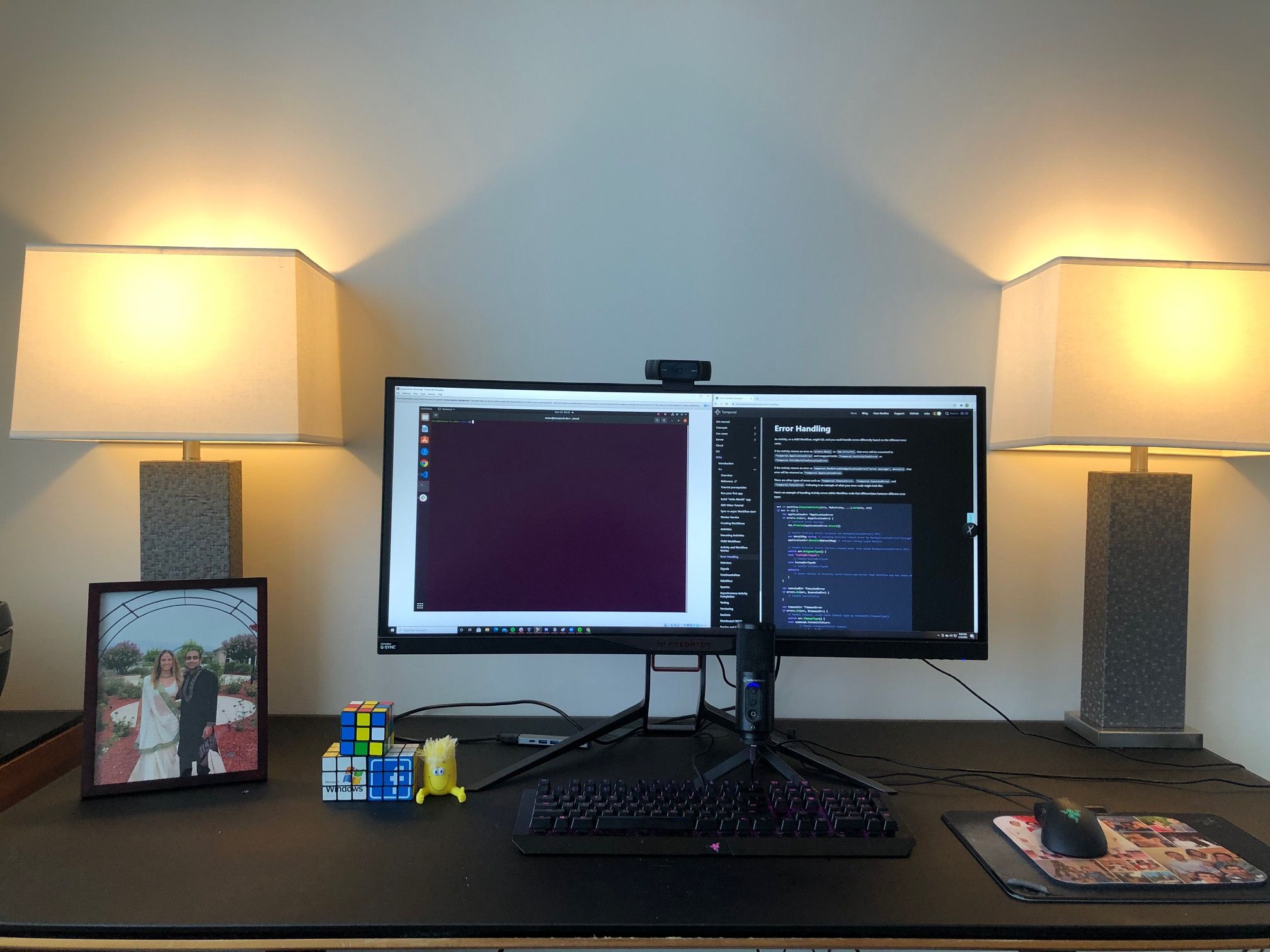 The desktop itself is something I ordered from Origin PC five years ago so it’s a pretty old machine now. I use it with an Acer Predator Gaming X34 Curved 34" UltraWide QHD monitor, which I can split screen.

For the camera I have a standard Logitech 1080p. My microphone is an Audio Technica ATR 2500 X USB, and my keyboard is a Razer BlackWindow with green mechanical switches. I’m not even a gamer, but I like keyboards that make large sounds and have good tactile feedback. Then as a bonus with this one the color rotates so it’ll cycle through all the colors. My mouse is also a Razer DeathAdder Chroma - Multi-Color Ergonomic Gaming Mouse.

OS: Windows, but all my development happens in a virtual box running Ubuntu.

Chat: Slack for team communication, but each of our own sub-teams has our own Discord channels. Discord is really good for ad hoc discussions because I just unmute my microphone and say, “Hey, Sergei, what do you think about X, Y, Z? Or can we talk about this pull request?”

My desk is a BDI Sequel adjustable standing desk, so it can go up or down if need be. The chair is a BDI Powell Office Chair.

Tea or coffee? Neither, I prefer 70% Theo’s salted almond, dark chocolate. That’s where the caffeine will come from!

I’m an instrument-rated private pilot, and right now I fly once per month to stay current. I also enjoy playing piano but I haven’t practiced it in a year or so. Swimming is something I do regularly too.

Temporal is a workflow orchestration platform. It was featured as an “Interesting Tool” in the Console Newsletter on 1 Apr 2021. This interview was conducted on 24 Mar 2021.