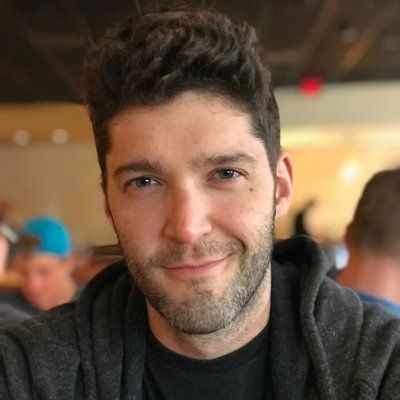 What is Tuple and why did you build it?

Tuple is an app to do remote pair programming on macOS. We built it because we wanted to stop using generic screen-sharing tools. We felt Zoom was too heavyweight, Google Meet’s quality wasn’t quite high enough and Slack calls didn’t have remote control. As programmers we felt we deserved a tool that was tailored towards our use cases and the things we cared about. We are now actively working on our latest client to open up Tuple to non-Mac users.

How are you different from Zoom and others?

We decided very early on that latency was important. A direct peer to peer connection is usually your best bet at having the lowest latency possible. The fewest hops between the two peers is great. Every hop introduces a little extra slowness. It also keeps our infrastructure simple. If you have media servers, you need to distribute them globally and maintain them. As we are a small start-up we wanted to avoid this.

We’re now starting to look at that decision and considering alternative approaches because one of our very popular requests is to support more than three people. Three people work in a mesh network bandwidth-wise, but going to four or five or ten, it’s going to fall over. For those cases we’re going to have a centralized server in place. We’ve started researching this and looking for people to help us build these solutions.

We also do a lot of work to maintain a super high quality on the screen share stream. This matters a lot when your pair has an 8-point font on a dark background.

Finally, we wrote the heart of our client in C++ so we tune like crazy and reduce CPU consumption.

I’ve been a developer for more than a decade, but for Tuple, I haven’t written very much of the code. I helped write some of the server backend in the early days when we were first getting off the ground. These days I spend most of my time on recruiting, sales, and marketing.

I’m doing the CEO tasks that developers are typically afraid of. Fortunately, I’ve always enjoyed doing those types of things, particularly the marketing side. I enjoy recording podcasts and being on Twitter and thinking of interesting ways to get the company in front of people that won’t make our developer audience cringe and hate us.

How do you approach marketing to developers?

Developers are very hard to market to if you’re trying to give them something they don’t want, or that they’re not asking for. Developers love to talk about the tools they use, thanks to this we benefit from word of mouth. They’re all on Twitter, so we are pretty active there.

One thing we do is ask our customers after they’ve had a string of highly rated Tuple calls to tweet about the app. We’re very honest and say: “We’re a small company, a big way that people find out about us is through Twitter. If you would share that you’re using us and you like us, that would be great”. If you search @Tuple, you’ll see that there’s a fairly steady drip of these coming out. A few people each week are having a good experience. Our main channel is word of mouth.

We also have people that will leave their employer, go somewhere else and then introduce Tuple at their new job. People talk about us on forums, conferences, user groups and on Slack etc. We’ve been fortunate that we’ve made something that some people like enough that they’re willing to share it with their colleagues

We’re pretty small. We have three co-founders. Spencer Dixon is our CTO and Joel Sutherland is our COO. They both mostly write code. We have a full-time engineer who lives in Paris and we have a part-time support person who lives in Portland. We also use an outsourced QA firm that helps us ship fewer bugs and that’s about it.

We’re currently looking for an experienced Linux developer. We’d like to hand off ownership of the Linux client to someone that knows Linux well. If somebody has experience or if they’re just incredibly fired up to learn this kind of thing, we’d love to talk to them. If that’s you, please email me directly at ben+linux@tuple.app.

I think the first program I ever saw was GORILLA.BAS on a DOS machine. It was like a QBasic program. It had super simple graphics and an interesting little physics engine in it.

The first time I really started writing code for real was my senior year of high school where I took a class at the local college that was teaching the basics of C. That was the first time I started to understand some of the lower level stuff going on in a computer; managing memory, pointers, and that sort of thing.

The next one I bumped into was Java at college. I guess maybe Scheme and then Java. I was technically programming, but they were all class assignments. I wasn’t building something I wanted. I was studying computer science, which was a lot of math, a bit of theory, and a bit of programming. The first language that I really used quite a bit was Ruby. That’s been more or less my home since then with some dabbling in things like Closure and Elm.

Tuple is a native app that runs on your desktop. The client is a Swift app for the UI layer and then underneath it is a C++ engine that handles the real time work. We use WebRTC under the hood.

It was a massive undertaking to split those pieces effectively so that we can start building on other platforms like our upcoming Linux client. Then the backend is a Rails app that just handles user creation, subscription management, billing, that kind of thing.

With the C++ foundation does that mean you’ll use something native like GTK on Linux?

Exactly, it is GTK. Our philosophy is that it’s worth having native clients so we have full access to the operating system’s APIs. This lets us have a thin, fast UIs that feel like first-class citizens.

In the early days we tried an electron app and we couldn’t get the performance we wanted. It felt heavy and we were not really accessing the APIs as we wished we could. Our plan going forward is native UI, backed by a cross-platform C++ engine.

Did you consider using a browser instead?

There are some niceties with using the browser version for sure. However, we wanted control of all the performance knobs and dials.

How are you thinking about Windows support?

I have a slight hope that it might just work with WSL! That might be a nice stop gap for a little bit. However, because we believe in the native UI, that wouldn’t be a long-term solution.

We’ll see how Linux goes first though. We’re still a very small team to be supporting tens of thousands of users and multiple platforms, which is why we’re hiring. Once we get our feet underneath us with multiple clients, we’re going to see how we feel about Windows. It’s certainly the right call from a market share point of view. The pure capitalist’s answer would be obviously we’re going to Windows as soon as possible, but as someone that cares about quality of life for all of us, it’s not totally black and white.

We got about twice as many requests for Linux as Windows. Also, we like Linux. We are excited to work on that platform and we’re excited to have Linux machines in the office, but there’s not really anyone on the team that’s particularly excited about Windows at the moment!

What was the most interesting development challenge building Tuple?

The hardest part was the fact that the three of us were web developers. If you asked us to build a CRUD app, no problem. But Tuple is as different from a CRUD app as it gets. It is a native desktop app with real-time communication and some thorny problems to solve.

This shows up when we search around for other people who have worked on similar projects. Screen sharing is never the demo app in anyone’s tutorial or blog posts! We’re always on the non-happy path. The APIs are never quite right for us. The examples are never quite right for us. When we use third party vendors, we always ask, “Do you have a C++ client?” And they’re like, “LOL, no, obviously not”.

I guess the biggest challenge was just how different it was from everything we’ve done and how off the beaten path of an app it is. This made it an interesting challenge, but also quite painful. Fortunately, my co-founders are badasses and we made it through to the other side.

What’s the most interesting tool or products you’re currently playing around with?

I can’t live without Alfred. I’m a huge keyboard advocate. My editor is Vim and has been for more than a decade now, so I want that experience in all of my environments. I even use Vimium for Chrome so I can navigate that with the keyboard. Pretty much every time I have to put my hand on a mouse, I’m a little bit disappointed.

I’m not writing much code day-to-day now, so it’s somewhat on the basic side. I have a Mac, a 2018 MacBook Pro and an LG 27 inch display. I use a Kinesis Advantage Pro keyboard, which has that split situation. It’s not a super crazy setup at the moment.

The interesting setup would probably be my co-founder, Spencer’s desk. Because we make a peer to peer collaboration app, you pretty much need two machines to test it. Now we have a Linux client as well in development, so he has four machines. Traveling and doing development for our engineers means a very heavy backpack. 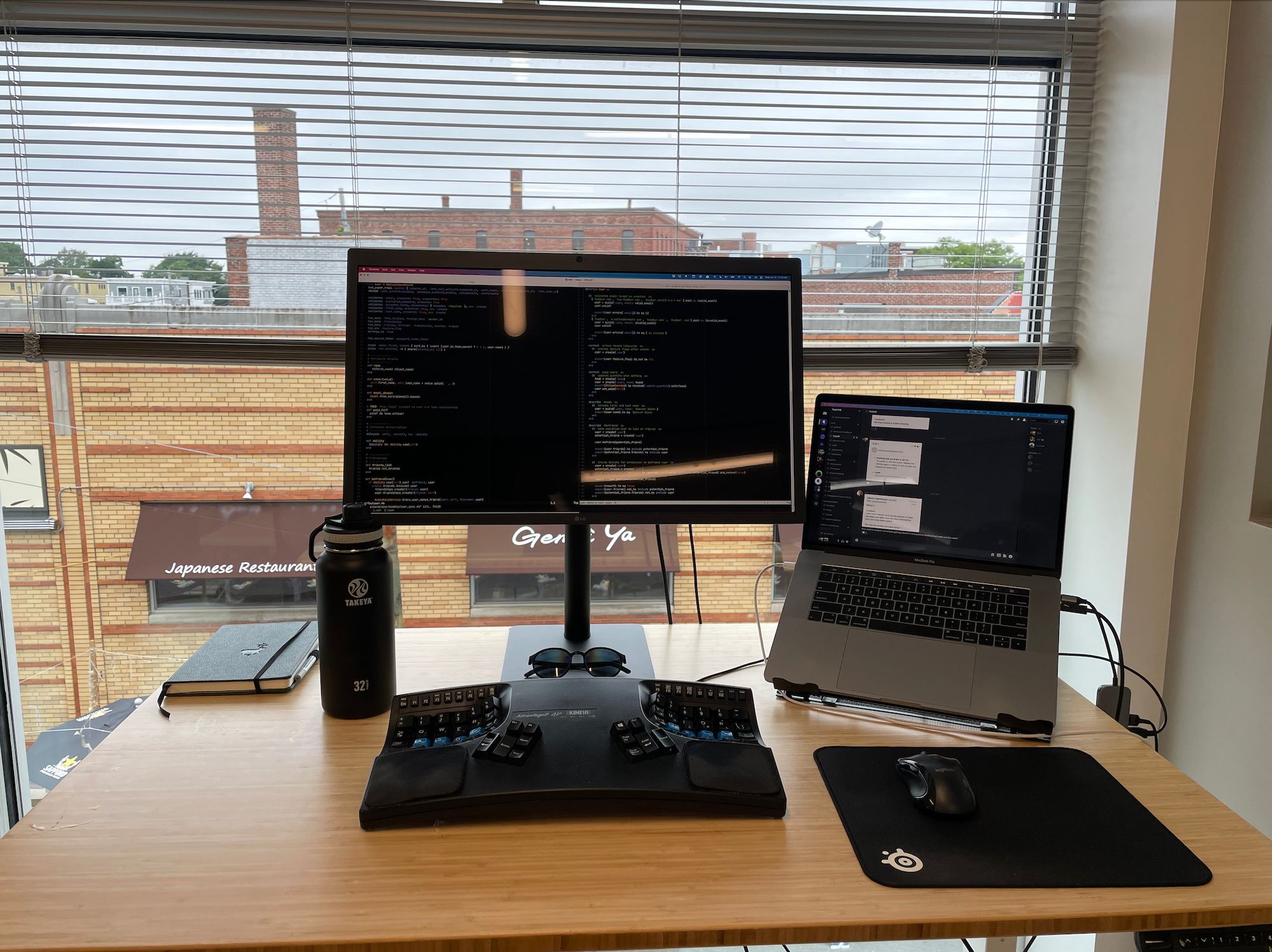 I have an Aeron chair in tall. My desk is a Fully desk that I try to stand in most of the time. At home, I have another standing desk and I don’t even have a chair next to it so I’m forced to stand, especially as I game. That’s my trade off with myself. I can play as many video games as I want, but I have to stand the whole time.

I like to do indoor rock climbing and am also picking up tennis and golf. My biggest hobby is singing. I sing in a barbershop quartet and also a classical chorus.

Tuple is a screen sharing tool optimized for developers. It was featured as an “interesting tool” in the Console newsletter on 15 Jul 2021. This interview was conducted on 9 Jul 2021.