Creator, vmcli - A set of utilities to help you run Linux VMs on M1 Macs. 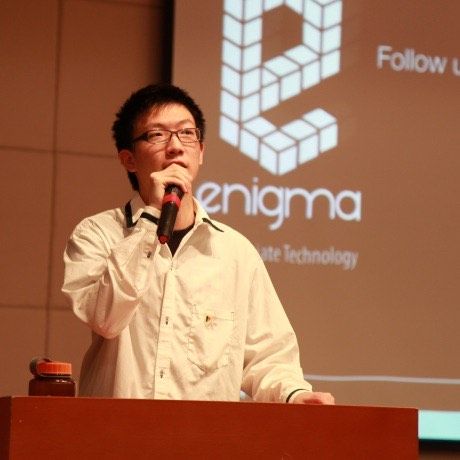 What is vmcli? Why did you build it?

vmcli is a set of utilities to help you run Linux VMs on M1 Macs.

I need to be able to work with a Linux VM, working inside Linux from time to time. When I use Windows, I would use Windows Subsystem for Linux, which nicely bridges Linux and Windows together, however, I couldn’t find such a lightweight approach to run Linux VMs on a Mac. The only other options are Parallels and QEMU, but Parallels is not free and QEMU can be a bit heavyweight for my liking.

I happened to run across the Docker M1 tech preview, which talks about how to seamlessly utilize the visualization of the new Apple Virtualization Framework. Upon further investigation it didn’t seem to be too hard to use, and there had already been a few proof of concepts. This encouraged me to build my own solution over a weekend.

Setting up a VM with vmcli.

How did you find working in Swift?

It was my first time using Swift. There was a bit of a learning curve to get used to it. The Swift language didn’t hold me back, it was trying to make something that directly interfaces with macOS that was challenging - especially with Grand Central Dispatch. The Swift language in my opinion is good.

The company where I work usually uses Golang and TypeScript, so in my day job I tend to use these two languages. In my own projects more recently I’ve been coding in C and C++. I just built a virtual LAN or VPN on top of Discord, so that you can game with friends. I also sometimes code in Python, because I work in a computer vision company.

I currently work at Zensors as a founding software engineer. Zensors is a computer vision platform that allows you to connect to a CCTV camera and turn it into a smart sensor. For example, if you have a CCTV camera on a street lamp post pointing towards a trash can, you can draw a boundary on the trash can, and our software and cloud platform will tell you when the trash can is overflowing.

We’re a start-up, so anything can happen in a day. Some days I’ll be focused on coding, other days I am in charge of doing DevOps. I’m currently in the process of writing a few Terraform scripts, which are “fun” to do. On occasions I also work directly with clients discussing where to install CCTV cameras. That occasionally involves physically travelling to the client’s location (pre-COVID of course).

What is the most interesting development challenge you’ve faced recently?

Following a project through to completion! I find it is really easy to get distracted, and often leave a project hanging for a couple of months before returning to it. There’s so many fun things out there to explore. I need to convince myself that it is worth committing a weekend or a couple of days to figure a project out.

For work, simply what has to be done has to be done. For my personal projects it’s mostly about fun. If something looks awesome to play with and won’t take more than a few weekends to complete, then I’ll probably just go and do it. Sometimes these projects last more than like a few weekends, but in general ‘fun’ is the main motivating factor for me to work on personal projects.

My Discord VPN side-project has had some interesting challenges. It uses the Discord network SDK and combies it with Wintun, a layer 3 TUN Driver to create a network adapter. This was fun to work with because it allowed me to make a zero-install VPN on top of Discord. Users just download the app, click host, then others can join and you’re all on the same LAN.

I’ve also been working again with Ethereum using a P106 which is a Nvidia 1060 card without a display output. At Zensors, we needed inexpensive cards to run machine learning jobs on, so when we purchased them for the company, I bought a few at the same time for personal use. As the Ethereum price is at a high point again, I’ve been using these cards to mine cryptocurrency. I have an Ethereum mining rig in my basement which is generating around $10 per day, a bit more than my recent experiment mining ethereum on my M1 Mac GPU! I’m also trying to reimplement the ethash algorithm in HLSL, as a DirectCompute shader. 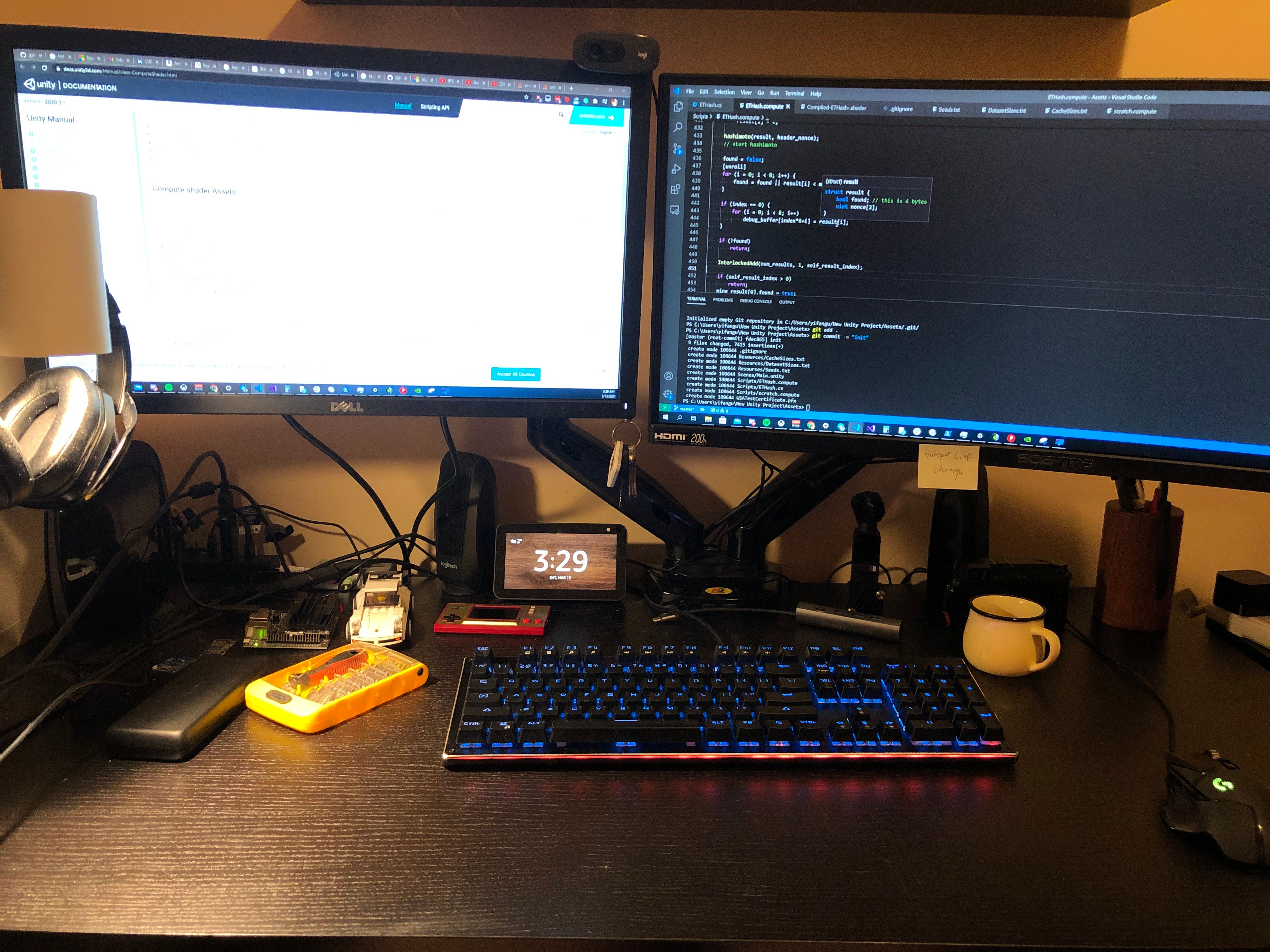 Monitors: A refurbished Dell monitor and an ultra wide Sceptre.

I use both Mac and Windows. I don’t really have a huge preference of Windows versus Mac. I’m the only person in the office who uses a Windows laptop, and an iPhone! I don’t have brand loyalty.

My work is mostly done on Linux VM. So we set up Linux development VMs on a server that we self-hosted. I’m also the de facto DevOps person in my company. so I have to use Linux. This means I use all three OS’s, which is not super common to see.

Tea or coffee? Currently drinking bottled tea, when at work I drink coffee.

I enjoy cycling, but because I live in Pittsburgh there’s a lot of mountains. The steepest street in the United States is actually about ten blocks from me, which makes cycling extremely hard (and fun when you’re going down the hills). I also like to hike on the weekends.

Otherwise, I spend most of my time doing tech-related activities. I have a laser cutter in my basement and a 3D-printer. One of the things I made with my laser cutter is a map coaster. I drew the map of Pittsburgh onto a piece of wood to make the perfect coaster.

For the 3D-printer, it’s mostly just random parts of things. I printed a part for my washing machine. I’ve also printed a door handle. The house I live in is quite old and I wanted to install a smart lock, but unsurprisingly it didn’t come with an adapter for a lock that’s made in the 1940s, so I printed my own adapter for that lock and my own door handle to work with it.

vmcli is a set of utilities to help you run Linux VMs on M1 Macs. It was featured as an “Interesting Tool” in the Console newsletter on 21 Jan 2021. This interview was conducted on 2 Mar 2021.